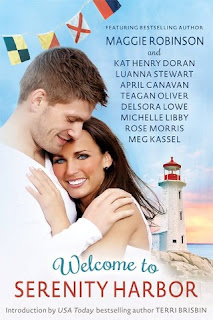 Authors, all members of the Maine Romance Writers (MRW) group, have novellas and short stories featured in an anthology which was released on November 10 in both print and e-book formats.
Welcome to Serenity Harbor, featuring nine novellas written by Maine authors and their friends, has the common thread of a small coastal Maine town, with some shared characters and locations among the books.

The idea for the anthology was hatched in August 2015, at the annual writing retreat of the Maine Romance Writers. Although not sponsored by MRW, all the authors, including one from New York, and one from New Jersey who wrote the introduction, are members of the Maine Romance Writers. The project was a cooperative effort, with a steering /production committee who set deadlines, worked on promotion, and engaged professional editors, formatters, a cover artist, and made sure the book would be available through all the digital venues, including iBooks, Kobo, Amazon and BN.

Local authors Michelle Libby from Windham and Meg Kassel from Raymond are also featured in the book.

Welcome to Serenity Harbor is available now.
Posted by Michelle Libby at 2:49 PM