The Kimball Family Association (Originated, incorporated and chartered in Maine) is holding a Maine Membership Drive, for all Maine Kimball’s. Your Kimball relatives living outside of Maine are welcome also.

The Association is taking a records journey throughout Maine, searching and collecting Kimball Family Ancestry’s info on the way. If you have information regarding your ancestry, please share with me at mykimball@roadrunner.com or mail to KFA, PO Box 453, West Kennebunk, ME 04094.

All persons of Kimball Ancestry are encouraged to join the community of the Kimball Association. This association originated in West Bethel, Maine by Elizabeth Mason Carter, and Elizabeth Kimball Watkins of Manchester, NH, in 1968.

Our reunion committee is looking to hold our 2017 reunion in Maine. The committee is already looking at the Poland Spring facility and seeking others potential affordable facilities in Maine.

We want your membership and input to make this association an ongoing success for making new friendships and restoring old ones.

Please join us, by going to www.kimballfamilyassociation.com and click on membership app or mail request to KFA at the above address.  Or call Myra at 207-985-2662 and reference Kimball and I will mail out a membership form.


I have never said I want to go to a gaming convention. However, this past weekend, I found myself being dragged over a mile in the rain to wait outside for half an hour to have my bag searched before being lead inside to a convention center half the size of Windham filled with every imaginable type of game from VR (that’s virtual reality, for those in the know), board games, video games, PC games and card games. 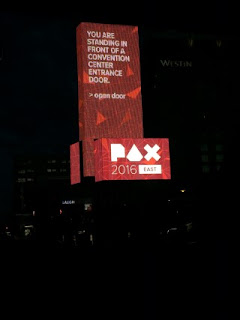 When we arrived at the Boston Convention Center and Expo on Saturday morning, my children had already been there a day and knew where to go and what to see. Luckily my husband had to go back to the hotel room across town and I was able to leisurely be shown the absolute chaos that was PAX East.

I was under the misconception that I would be able to sit somewhere and do a little writing, but man was I wrong. There was no time. Too much to see. Must keep moving. My son and I played a soccer game with cars on a Surface computer. I was more interested in the Surface, since I had just been told that it changed a woman’s life. The computer was there for gaming and I got locked out of the programs I wanted to see. Moving on. 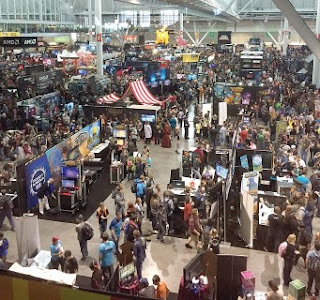 The place was mobbed and the lines were long for some of the most popular attractions. My son is interested in game programming and I scoped out the college booths and we stopped by most of them.
There were also panels for those who wanted to publish their board games or those who want to be in the biz. We sat in on one talk given by the man who writes the Foxtrot, Bill Amend. His comic strip is riddled with Geeky language, math and gaming jokes. He is also an Eagle Scout, the highest rank in Boy Scouting, which impressed me.

There was so much visual stimulation that I’m still a little amazed at how quiet things are in my house.
I’m not a gamer, I like Mario Kart (I won one game), and that soccer car game we played on the Square (I scored), but I’m not going to be a VR fan. Give me a Mayfair Game any day.

It was an amazing experience that I don’t need to repeat anytime soon, but I will for my children. Oh, and the lines for the women’s bathroom at a gaming convention…non-existent!
Posted by Michelle Libby at 2:00 AM No comments:

Charlie Tufts remembers a time when he was in the Navy in Vietnam when there were emergencies and blood was needed to save a life. Now as a successful real estate agent in Windham, Tufts has taken it upon himself to organize quarterly blood drives as a member of the American Legion Post 148.

“I’ve been involved for my entire adult life,” he said. “The American Legion does this to give back to the community.” The blood drive will be on April 27, from 1 p.m. to 6 p.m. at the Windham Veterans Center behind the Windham Mall.

Tufts has enlisted help from the American Legion, Veterans of Foreign Wars and the Windham Veterans Association to help with sign ins and refreshments. He said, the Red Cross does the bulk of the work, from upfront advertising, robo calling donors in the area and “they come in with their magnificent team to set up the venue.”

“It’s a public service,” he said. Tufts admits that the hardest part is coordinating dates between the Veteran center and the Red Cross.

“We haven’t had a really stellar turn out. I’d really love to double the 25 pints we usually have,” Tufts said.

The blood drive is on Wednesday, April 27, from 1 p.m. to 6 p.m. Watch for the Red Cross blood drive signs.
Posted by Michelle Libby at 2:00 AM No comments: 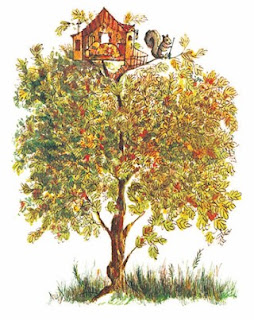 I was sad, as were quite a few young folks, to hear that the Windham Skatepark was closed indefinitely. Over the years I have watched the transformation of the park and it’s evolution from a place where everyone was welcome. The place was properly maintained. Now it is the ultimate failure.

When I was young, my parents read a book called “Miss Suzy” to me. They still sell the book on Amazon and I always think of it when I think of the statepark.

For a while the park was thriving when there was someone on staff watching over things every afternoon and evening. Parents weren’t afraid to drop their children off or have their kids walk there from school. The equipment, ramps, jumps and the like were in good shape and those skateboarders and rollerbladers who used it helped keep everything in working order. Bikes were not allowed on the park.

Once the town decided not to fund the supervision, the park turned from a skateboarders paradise to a bike park. I don’t know that the kids on the bikes held the same reverence in the use of the park. Skaters stopped going there.

In my story, “Miss Suzy is a little gray squirrel who lives happily in her oak-tree home…” One day she is chased away by mean red squirrels.

The squirrels in the story breakup her beautiful home.

Miss Suzy finds brave toy soldiers and they help her defeat the red squirrels and take back her home.
Right now no one is winning at the skatepark.

It’s too bad that something that should be a boon for the town has been destroyed. Being so close to the public safety building was also a good thing, keeping most of the kids on the straight and narrow.

I don’t pretend to know what the town was thinking at any stage of the skatepark’s life, but I’m hoping they can restore it to its former glory for many more generations of skaters to enjoy.
Posted by Michelle Libby at 2:00 AM No comments:

I must declare I’m not a political enthusiast but have marked the vote ballot since I got home from the wars. My vote has always been for the candidate that has shown merit and one that holds the “working citizen in high esteem!” One that believes our country is the home of the brave and a sanctuary for those that wish to live and earn their freedom.

It’s a privilege to be able to live in a country that prides itself in being self-supporting. Those that have fallen on hard times must be willing to make themselves available to their towns and cities, to assist them in any way they can. Be a volunteer in the school system, highway maintenance, etcetera, while you draw subsistence that the working citizens provide.

This will help our tax base and make our country strong. We must remember the men and women went to war to make America a place that welcomes! We all must pull the cart to make our home a place for the children’s future and a place to be proud of!

Stand up and be counted.
“To be an American citizen is a privilege.”

The American,
Fred Collins
Posted by Michelle Libby at 2:00 AM No comments: 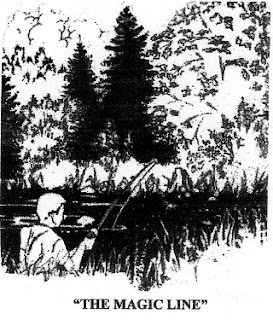 Dear Readers, each day we have the opportunity to paint a picture. What kind of a picture will you paint? The world is worth more than a passing glance. The words relating to the building of a nation are deeply meaningful. The formation that has made our country, in fact the world, requires deep thought.

You must ask yourself, how did this happen? Each town and village has a story to tell. Those aspirations of those that have gone before us, their desire to make their environment a better place for the future has made a better place to live.

Each time we bend over to pick up a piece of waste or refrain from tossing piece from the car. It doesn’t matter if it is Main Street or in the quiet forest, you can feel good that you care. If you have a piece of waste to throw away, put it in your pocket until you find a place.

Mother Nature will be proud of you.”

The American,
Fred Collins
Posted by Michelle Libby at 2:00 AM No comments:


I’ve mentioned before that I like to camp, get out of town, listen to the crackle of the campfire, roast some marshmallows and swim. When my husband and I first started camping together, he borrowed a tent from the Bates Outing Club and we borrowed his parent’s car.


We tent camped for many years, adding mattresses and more comfortable accommodations. Then, when my children were little, we upgraded to a small pop up camper we pulled behind our minivan. Then, when the kids were bigger, we moved into another, bigger, pop up camper. I loved being off the ground, having a dry place to sit, we had some power and it felt safer. 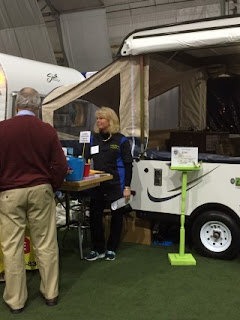 My dream was always to have an RV and travel around the country. I’m working on parts of that dream.
Last weekend at the RV and Camp Show in Portland, we got to witness some friends leave tent camping behind by purchasing their first pull-behind RV. It was exciting to see them walk from unit to unit looking for features they wanted, at the weight they could tow, at the price they could afford.

My husband and I walked around looking at places to camp (we found some). At one point I checked my phone and I had a text. “We’ve putting down a deposit.” We excused ourselves and ran over to the unit. They were purchasing that exact trailer. We sat in it ohhhing and ahhhing over it. To be honest, I was beautiful with new everything and perfect colors. It is sure to change their camping experience for the better.

A camping show like the one last weekend, gives people the chance to dream and set goals. From a small A-frame camper to a huge bus motorhome, visitors walked through looking at what they liked and what they didn’t care for. Budgets were squeezed and deals were made, but not for everyone.

Like our friends, many families have to save up for a deposit on a camper. The goal this weekend was to visit the campers and campgrounds, but they knew they would be spending another year in a tent.

Really it doesn’t matter what you camp in. I prefer a mattress now, while my son will sleep outside on a rock at the top of a mountain. Camping is what you make of it and what you’ll make are memories. Memories that will last a lifetime.
Posted by Michelle Libby at 2:00 AM No comments: