This past week I had the opportunity to attend the retirement ceremony for one of my high school classmates and friend. He was retiring from the Air Force as a Lt. Colonel after 21 years of service.
When we received the invitation, I was excited to see a military retirement ceremony. I didn’t think about the fact I would be seeing my friend for the first time in 19 years or that I don’t look quite like I did when I was in high school. He, of course, hadn’t changed a bit.

When you don’t see someone for that long, they remain the same age in your mind’s eye. To me he was still 18-years-old despite now being married to his sweet wife and having three children. 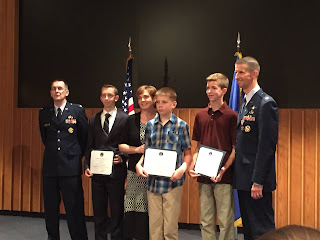 As I sat at the ceremony with my husband, I was in awe of the amazing things Matthew had accomplished in his time in the Air Force. He has lived all over the country, had walked on the launch pad for the space shuttles and created technology and problem solved to help make our country stronger and to save the taxpayers money.

His journey has been exciting and at times trying on his family, but together they have come through it and are ready for the next phase of their adventures in Massachusetts. As he was giving his thank you remarks, and as the Colonel was talking about all Matthew had accomplished, I found myself growing prouder and prouder of the man he had become. Someone I knew worked on ships that went into space, someone I went to school with and received Christmas cards from worked at the Pentagon in Washington DC. 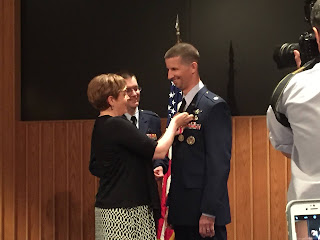 The word slug was passed around to some people who aren’t Lt. Col. Matthew McQuinn, Retired. And, boy did I feel that way. I was full of pride for the man who at one point helped convince me that I should be on the math team and the computer team in high school. (That was a disaster.) However, I was envious of the travel and adventures their family had had, despite having my own adventures.


Seeing someone pass from one life experience into another and hear about all the amazing things he had done in his career gave me perspective on growing up. We all have our paths in life. Some paths lead to greatness for many, others lead to a quieter life where what we does matters to a few or a few hundred.

It was great to see Matthew, Julie and their boys, as well as their parents and family members. This day and age it doesn’t make sense not to stay in touch. It’s easier than ever before. Reach out to someone you used to know and say “hello”. You might be amazed at the perspective you find.
Posted by Michelle Libby at 2:00 AM