Insight - Flying the flag at half-staff - By Michelle Libby


The craziness in our nation has brought to my attention that our American flags are spending more time at half-staff then all the way at the top where they should be. Not too long ago it was a rare occasion when flags were lowered to half-staff, when President Regan died and again when Nancy Regan died or on Pearl Harbor Day.

Now we have lowered the flag and no one can keep track of why it’s lowered each day. There is actually an app to remind people where the flag should be flown on that day. 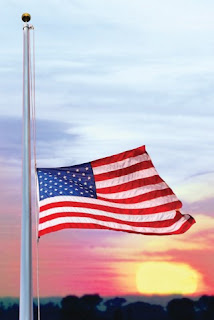 This is what the rules for flying the flag at half-staff are from the Flag Code. “By order of the President, the flag shall be flown at half-staff upon the death of principal figures of the United States Government and the Governor of a State, territory, or possession, as a mark of respect to their memory. In the event of the death of other officials or foreign dignitaries, the flag is to be displayed at half-staff according to Presidential orders, or in accordance with recognized customs or practices not inconsistent with law.”
On another website it said that the “President may order half-staff display of the flag after other tragic events.”

The flag has been lowered nine times since January and often it was kept at half-staff for more than one day. In 2015, we lowered it nine times the whole year. We lowered the flags in 2016 for Antonin Scalia, Nancy Regan, attacks in Brussels, Peace Officers Memorial Day, Memorial Day, attack in Orlando, attack in Dallas, attack in Nice and the attack in Baton Rouge.

When a flag is raised it should be raised all the way to the top and then lowered to half-staff. The reverse is true when it is retired at the end of the day. It gets raised to the top and then brought back down to retire it. The other way might be quicker, but this is the proper way.

Lowering our flag is a sign of solidarity with the communities these tragedies took place in. However, does it come to a point where we desensitize the world to our gesture or to where it doesn’t have the same weight when a president passes away? Are there other ways we can honor victims?
Posted by Michelle Libby at 10:24 AM