Insight - What does it mean to strike?


This week I had the opportunity to view the Fairpoint picket lines. I had never seen a picket line because I am from a family, where my parents and husband were and are never allowed to strike. I was able to speak to some of the picketers and one of the organizers to get some insight into what is happening.


The strike began on October 17th forcing close to 2,000 people in three states onto the picket lines. Their fight, that still continues today, is for fair contracts, keeping jobs local, keeping pensions and job security, according to Raymond resident Erin Nunn.

There is a negotiation team in Washington D.C working for the union. IBEW 2327 and CWA Local 1400. While mediation is going on there is a gag order in effect, so people on the lines don’t know exactly what is going on, but they are “cautiously optimistic,” said Nunn.

Being part of a union, “changes the basic power relationship at work. Without a union, employers have almost all the rights. They can change your pay and working conditions at any time as long as they do not violate certain laws, like the minimum wage. Any benefits you receive are at the discretion of your employer.”

“A union gives you strength in numbers to improve your pay, benefits, and working conditions.” (SEIU503.org)

Union members are striking 12 hours a day, 7 days a week. They have a schedule to accommodate people who had to go get jobs because while the workers are on strike, they are not getting paid.

“The goal is to get a fair contract and get back to work,” said union worker Julie Dawkins.

The people who have taken over the union jobs in the interim are considered “scabs”. When they arrive at work, the protesters march around in front of them three times and chant. Then as the car drives through, the yell “scab”. 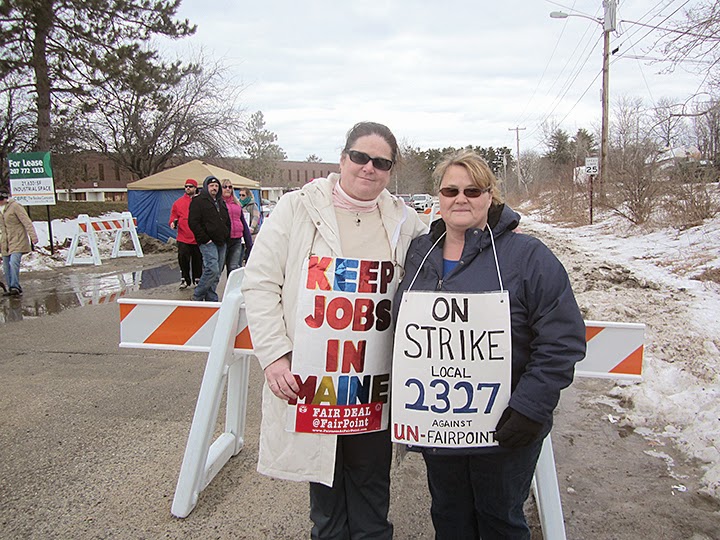 As I said, I’m only beginning to understand how unions and strikes work. The union says “strike” and the workers have to leave their desks and start picketing regardless of how this will affect their families and their pocketbooks.

The replacement workers are only trying to do a job and get paid to help their families. What’s wrong with that? Why should they be yelled at on their way to and from work?

To me it seems like this is a very big us versus them mentality. What happens when the strike is over and the union workers return to their desks? Does everything go back to the way it was?

Nunn said that they all wanted to go back to work to help the customers. How are the customers coming first if Fairpoint is dragging out this fight with its employees? It seems to me that having trained employees who can help the customers should be the first priority. When it comes to teachers, nurses and police officers, they often work without contracts while negotiations are taking place behind the scenes…they are however still getting paid. My question is why strike? Is the hope that the compromise will happen sooner? I feel bad for the employees of Fairpoint who have been forced into their position of having a job, but needing to find another one to make ends meet. Where does it end?

Posted by Michelle Libby at 4:55 PM No comments:

Last Thursday night I was voted in as a new board member of the Sebago Lake Chamber of Commerce. When I was asked to consider the position, I didn’t know what to think. I’d never been asked to be involved in an organization that didn’t begin and end with my children. (I’m not thinking about the Maine Romance Writers organization which I’m president of.)


I was honored and excited to have a new opportunity and accepted the nomination. At the awards dinner in Gray, I was called to the front of the room with the five other new board members and the new officers and we were all voted in. As I started back toward my seat I realized that I was a grown up. (I know, I’ve been a grown up for a long time) This was different. I was a part of something that wasn’t kid centered. When I go to meetings, they want to hear about my business and not about my children. When we plan programs it will be to improve businesses in the areas we serve.

I will be working with people I have never had the pleasure of collaborating with. These people know about running businesses, working as a team and corporate culture, something I’ve only scratched the surface of in the last two years.

As a writer, I do a lot alone. Interacting with people is something I do during interviews, but I had never been involved with the business of hiring and letting someone go, pay checks and quality control until The Windham Eagle.

I’m so excited for the opportunity to learn new skills and new information in my new role.  Business world look out! It’s going to be one heck of a year.

Posted by Michelle Libby at 3:31 PM No comments:

Insight - Is it Spring yet?


Baby, it’s cold outside. The invention of the Internet and social media has made the world smaller. It’s so easy to check on your smartphone to see what the weather is in Florida or Playa del Carmen. (70 degrees today)


This week I saw that one of the Windham graduates who went to Florida for college posted a picture of the weather page for Windham and the one from her town down south. Needless to say there was a big discrepancy in temperatures.

Every day that my daughter is home from college, I get a weather update about “the County”. “The high in Presque Isle today is -1. And with the wind chill, it’s -50,” she said.

“Well that’s cold and probably why they don’t want you up there right now. You may never want to come back, especially when your other college attending friends are posting about the balmy temps down south.

Did I mention it’s cold out? This is the time of year when people should be bundling up, wearing coats, hats, mittens, boots and scarves. Doing that will help keep you warm and healthy. We are going through the cold and flu season where everyone is hacking and sneezing. Anything we can do to stop the spread of these germs is good.

Washing hands or using the sanitizing gel is a good start to staying healthy. There are lots of sayings about hand washing, including washing for two times through the Happy Birthday song working up a good lather.

Getting enough sleep is another key to staying well. Staying up until 11 or midnight to watch the last hour of the reality show you’re hooked on, isn’t worth it and I love reality shows. However, they can most likely be seen online the next day.

Even if you do these things, it’s possible to still get sick. Then it is time for you to get well, eat a balanced meal, take medicine if prescribed, and sleep in, take naps and let your body heal itself.
Best wishes. Stay warm and healthy. Spring is only 70 days away.
Posted by Michelle Libby at 7:19 PM No comments:


Getting ready for the New Year is like the first day of school for me. I love the excitement I get from starting something new…even if it isn’t really something new. I like to clean, organize, finish projects so that I can start the New Year fresh.


This week I’ve been thinking that we should all look forward and not behind. Yesterday is in the past…tomorrow and 2015 is yet to come and what we make of it is determined by what we do and do not do.

We say we want to lose weight…it’s not going to happen sitting on the couch.

We say we want to make more money…then see if there is a way to do that by cutting back, getting a better job, or selling something of value.

We say we want to stop smoking…then contact a smoking cessation support group.

Nothing is going to happen if we sit still and do nothing.

I’m looking forward to the exciting things 2015 will bring. We will cover the positive, the quirky, the interesting people and events that happen in our communities. We are always striving to make The Windham Eagle a stronger paper that keeps you informed, entertains you and makes you proud to call Windham, Raymond, Gray, New Gloucester, Standish home.

We will set some New Year’s resolutions here at the paper, I’m not sure what they will be, and we will call them goals, but it’s the same idea. We all should strive to be better, do better and act better.
When we think about 2015, we need to consider what outside influences will do to us. In this week’s paper, see what the outlook is for the real estate market, look at the movies from 2014, many of which are still playing at the theater, and visit with Gary Plummer as he turns in his political hat after decades serving the community.

I guess we have to look back, just a glance, to see where we’ve been so we can know how great the future is.

Happy New Year to all of our readers, advertisers and supporters. We wish you all the best in 2015.

Posted by Michelle Libby at 2:54 PM No comments: