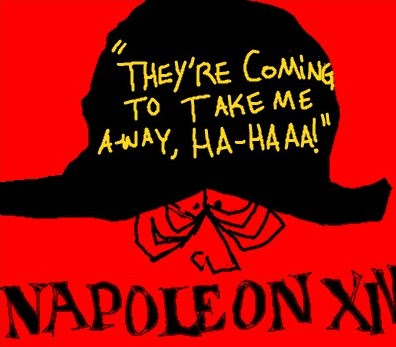 I happened to be driving my wife’s car last week and had the 70s on 7 channel playing on her Sirius XM radio. The cover of an old Randy Newman tune by Joe Cocker “You Can Leave Your Hat On” began to play and I thought to myself what a ridiculous title for a songwriter to come up with.

Through the years I’ve listened to many songs with weird, strange and unusual titles, far too many to list in this space, but it prompted me to jot down as many odd song titles as I could recall at the time. I share them with readers here, mindful that this is a family newspaper and I’ve dropped song titles overtly relating to human biology or alcohol consumption.

“You Can Leave Your Hat On” is an exception for this list despite it being hailed as a traditional anthem for striptease artists. I include it because a version recorded by Tom Jones was featured in the 1997 film “The Full Monty.” The original absurd song was written by Randy Newman (“Short People”) for his 1972 album “Sail Away” and the video for Cocker’s cover includes Mickey Rourke and Kim Basinger from the 1986 movie “9 1/2 Weeks.”

My father was a huge fan of singer Roger Miller in the 1960s. He knew all the words to his songs and would belt them out while driving across town while listening to the radio in his 1962 Chevrolet Impala. Although I preferred Miller’s classic “King of the Road,” my father once told me that his favorite Roger Miller tune was “You Can’t Roller Skate In A Buffalo Herd.”

Can you imagine the creative songwriting process that went into coming up with that idea? Extremely silly but very poignant, as the song delivers a message that everyone can be happy if they have a mind to be. In this 1965 masterpiece, Miller’s lyrics mention driving around with a tiger in your car, swimming in a baseball pool and taking a shower in a parakeet cage. Truly makes me wonder about what’s actually involved in coming up with a hit song.

My list intentionally avoids discussing a bevy of nonsensical titles such as “Ob-La-Di, Ob-La-Da” by The Beatles, “De Do Do Do De Da Da Da” by The Police, “Mmm Mmm Mmm Mmm” by the Crash Test Dummies, and “MMMBop” by Hanson. It also discounts obvious drivel such as Brian Hyland’s 1960 hit “Itsy Bitsy Teenie Weenie Yellow Polka Dot Bikini” with such memorable lyrics as “one, two, three, four, tell the people what she wore.”

I was on my way home from serving in the U.S. Air Force in Germany in 1979 when I heard an unbelievable song by Lorretta Lynn and Conway Twitty playing in the airport in Frankfurt while I waited for my Lufthansa flight to New York City. “You’re The Reason Our Kids Are Ugly” has to rank right up there on my list of weird, strange and unusual song titles and the lyrics match that sentiment as well.

They’re certainly no Amber Heard and Johnny Depp, but country stars Twitty and Lynn capture the essence of a marriage gone bad by proclaiming in the song, “And that's the reason my good looks and my figure's gone. And that's the reason I ain't got no hair to comb. An' you're the reason our kids are ugly, little darling. Ah but looks ain't everything.”

Along the same line, I have included on my list titles such as “I Married Her (Just Because She Looks Like You)” by Lyle Lovett, “My Lucky Pants Failed Me Again” by Tom Rosenthal, and “She never told me she was a Mime” by Weird Al Yankovich.

As a 20-year-old in 1974, I remember buying Elton John’s double-length album “Goodbye Yellow Brick Road” on 8-track cassette and hearing the tune “This Song Has No Title” by lyricist Bernie Taupin. Thought it was highly unusual for such a prominent singer to record such an odd song and I wasn’t disappointed when I listened to it.

It featured lyrics such as “And each day I learn just a little bit more. I don't know why but I do know what for. If we're all going somewhere let's get there soon. Oh this song's got no title just words and a tune.”

Rounding out my list are a group of song titles that pretty much need no explanation including “Satan Gave Me A Taco” by Beck; “The Voice of Cheese” by Frank Zappa; “Shoplifters of the World Unite” by The Smiths; “Washing Machine Heart” by Mitski; “Nails for Breakfast, Tacks for Snacks” by Panic! at the Disco; “Tubthumping” by Chumbawamba; “I’ve Been Flushed from the Bathroom of your Heart” by Johnny Cash; and “She’s got the Gold Mine and I got the Shaft” by Jerry Reed.

As for me, I always turn up the volume whenever Napoleon XIV’s 1966 classic hit “They’re Coming to take Me Away, Ha-Haaa!” comes on the radio. And if you’ve never heard its sequel tune, also from 1966, "I'm Happy They Took You Away, Ha-Haaa!" by Josephine XV, you are indeed missing some genuine schlock humor. <