Insight: A merry-go-round and the mulberry tree

It was September 30th, 1999 when I bolted from America’s heartland to experience life in Maine. As the tallgrass prairies of my Kansas home slowly retreated from my review mirror, I had no idea what to expect or how long I would make the beautiful rugged coastline my home. All I knew is I was ready and eager for whatever the unknown future had in store for me. 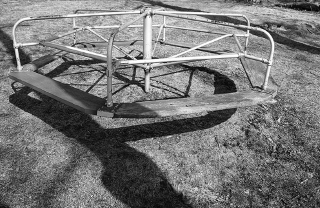 My time along the eastern shoreline has introduced me
to new friends, new experiences, a new husband and more adventures – and challenges – than I could have ever imagine at the young age of 34. But what has surprised me the most about this long-term escapade in what is now become my permanent home, is the shock I experience when I return to Kansas to visit.

You see, while I was moving forward and living my life – for some reason – I thought the life I left behind would remain the same. But it turns out the lives of my friends and relatives back home have moved on, too.

I just returned from my most recent visit to Kansas to witness the wedding of my youngest nephew (who, by the way was a little over a year old when I left 20 years ago. Shouldn’t he still be a toddler?).

Although it was a very quick weekend getaway for me, I took some time to visit some old stomping grounds that included attending a Saturday evening Mass at the church where I was baptized. It had been over 35 years since I had stepped foot into that house of worship and I yearned to touch, smell, see and hear the sacred space I once called home and was a part of my childhood.

I must humbly admit, it wasn’t for religious or spiritual reasons that I attended Mass. The truth is, I had to see, again, the ornate structure that was built in the early 1900s by local farmers. This elaborate building with it’s baroque-like architecture sits in the middle of corn and wheat fields and is surrounded by less intricate priest parsonage, nuns’ home and a catholic school.

When Mass was walked, I walked the grounds to discover that the nuns’ home is no longer there, and the school will soon be taken down as well. But the greatest shock to me was the playground that housed a merry go round that sat directly underneath a large mulberry tree had vanished, too.

I don’t know why but seeing the empty spaces that once held the merry-go-round and the mulberry tree saddened me the most. It was as if I wasn’t quite ready to break free from my past. According to the online Merriam-Webster Dictionary, one definition of a merry-go-round is, “a cycle of activity that is complex, fast-paced, or difficult to break out of.” Isn’t it ironic that life can be like that too….complex, fast paced and not always easy to let go of those things near and dear to our hearts.

According to mametupa.tumblr.com, “[A carousel] has no beginning and no end. Like wheels, carousels imply motion: cyclical, repetitive motion and ups and downs. The carousel, as a metaphor, has several universal connotations generally dealing with the idealized innocence of youth, innocence lost, the constancy of life and fate, an allusion to the individual and society at large. As with the yin/yang, eastern symbol for the unification of opposites, it becomes clear how profound, yet simple, elemental truths can be. As we face the unknown of the future it is important to realize the essence of some forgotten truths from the past. In dreams, a carousel may represent memories of the past and childhood freedoms.”

Walking away from the church and the empty spaces, I relished for a moment my short visit to my past. As I left, my sadness for things and people that have changed was replaced for new freedoms and whatever the unknown future has in store for me.