Insight: Allowing the extraordinary to happen

She turned right instead of left and was heading in the wrong direction. I was sitting in the backseat and didn’t want to be one of those backseat drivers, so I didn’t speak up. Fortunately, the passenger in the front bluntly stated, “We should be heading the other way.” It was then I explained to the driver where we needed to turn in order to reach our destination. I don’t know if we made it, because I woke up.

It was the first of four dreams I’ve had in the past month where I am sitting in the backseat of a car, putting my life – my journey - into the hands of other drivers. 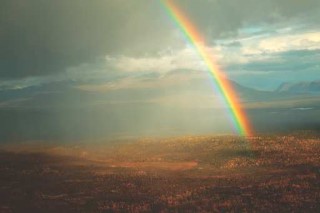 But finally, two nights ago, I found myself dreaming that I was driving my own vehicle. But this
time, although I knew my destination, I needed directions. I called the police from - believe it or not - a phone booth. They were frustrated with me and refused to offer the instructions I needed. Feeling a bit apprehensive but hopeful, I hopped back into my blue Honda Element and drove west, somehow trusting I would make it.

Then suddenly, I was swept into an airplane as it was landing. As we approached the runway, we flew under four beautiful rainbows. I knew I had successfully reached my destination and the real adventure was just beginning. I woke up.

The dreams provide a paradoxical message for me. It is apparent that I need to take control and be in command of the direction of my life, but in order to do so, I must also let go of the concept of control, trusting my instincts, and allow for the extraordinary.

This contradiction in life can be found in everyday events. In fact, it is such a norm that most of us don’t notice it unless it’s of the “hit by a mac truck” variety. Those experiences are deserving of another Insight altogether. Today, I will concentrate on the everyday type.

For example, our very own amazing gazebo builder and Boy Scout, Jamie Louko of Raymond provides the perfect example of being able to successfully live within this dichotomy. (See front page for his story). Reporter, Briana Bizier writes, “Louko discovered during the course of the gazebo’s planning and construction, building projects are rarely straightforward. Louko’s original plan for the gazebo proved to be too close to a land lot line, and his application for a building permit was turned down by the select board. This setback forced a creative reevaluation of his original plan. ‘We were forced to move to the front of the library, which ended up being an even better place to build,” Louko told me. “I am very thankful because I think it was for the better.”’

Jamie had a plan, but he was required to adjust his expectations, and thus control over the situation. This eventually allowed for a more perfect outcome. Much like building construction and plans, life is rarely straightforward. And although we do have some control and command over our lives, most often there are things beyond are control and we must adjust.

I am both profoundly agitated and – at the same time – exceptionally enthusiastic about allowing the extraordinary to happen. When you know where you are heading but don’t know how you’re going to get there or how it’s going to look – your breath can be taken away. Your breath can be robbed by fear AND your breath can be seized by beauty. In between those two extremes, perfect beauty can arise.

If, by chance, on my way to the land of my dreams and goals, I happen to fly beneath four rainbows – you can bet your bottom dollar that I’ll take a photo and capture the beauty to share with you – the extraordinary that was allowed to happen.