Insight: A turtle’s stroll into adulthood

With eyes closed and face turned up toward the sky, soaking in the sun’s rays, I drifted into my own inner world as I sat in my kayak that floated toward the pond’s edge. “Wow! That’s amazing. There are eight turtles on the log next to you,” my husband said, whisking me out my Sunday afternoon stupor. 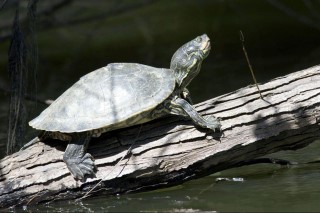 I had drifted so close to the log, I could have touched the hard-shell terrapins, also inebriated by the
sun’s warmth. I leaned forward slowly to gain a microscopic-like view, hoping not to shock them out of their own Sunday stupor and dive in the water away from me. There were many things I noticed about them - their different sizes, the various designs and shapes each individual shell contained and the way each tilted their head. But what fascinated me the most was how the turtles strategically separated themselves from one another. It was as if the ability to hide in their shells wasn’t enough to protect them from the harshness of the outside world so that sat as far away from each other as possible.

According to livescience.com, turtles are not social creatures. While they typically don’t mind if there are other turtles around them, they don’t interact or socialize. While, I am an outwardly social creature, I do have days when I feel like a freshwater turtle – and sometimes without the shell. But then, that may be what adulthood is all about - moving forward in the world, even on difficult days, when you feel exposed and lonely. Adulthood can come with some pretty hard blows, sometimes hard enough to knock off the protective shell we use to shield us in time of struggle and danger.

In his article, “How to grow up: A guide to humans,” author Mark Manson pointed out that although tasks such as preparing for job interviews, managing your finances, cleaning up after yourself is consider being a responsible adult, “[These things] simply prevent you from being a child, which is not the same thing as being an adult.”

Manson went on to explain that most people do these adult tasks because they are “rule- and transaction-based.” For example, you prepare well for a job interview because you want to get a good job. “Bargaining with rules and the social order allows us to be functioning human beings in the world. But ideally, after some time, we will begin to realize that the whole world cannot always be bargained with. If you have to convince someone to love you, then they don’t love you. If you have to cajole someone into respecting you, then they don’t respect you. The most precious and important things in life cannot be bargained with.”

This concept of “real” adulthood has been with me all week as I struggled to write Simone Emmons’ and Kristen Stacy’s stories (see “Service Dog Strong” on front page). Both sexually assaulted, they experienced loneliness and fear but admitted that telling their story makes them feel less alone – realizing there are others with similar experiences.

If there was anything I learned from my conversation with Simone and Kristen is during those tough and difficult moments – when we feel exposed and lonely – we are never truly alone. Much like the eight turtles last Sunday, there is always someone next to us. Even if there is distance between us – we are all in this together. We all sit on the same log – basking in the same sun. Perhaps this is adulthood at its best.

Email ThisBlogThis!Share to TwitterShare to FacebookShare to Pinterest
Labels: 2019, all in this together, Editorial, Insight, Lorraine Glowczak, not alone, Raymond, The Windham Eagle, turtle, Windham