A lot of network TV shows today are recorded and played back later by viewers, where advertisers lose control. It’s likely most people fast forward over them.

But people watch sports when it airs, because no one wants to watch a re-run of a game if they know who won, and unless you live in a cave, you can’t avoid someone spoiling it.

Back in the ‘60s and ‘70s, if you liked Gilligan’s Island or Perry Mason, you had to sit down and watch when they aired, and were forced to sit through all the advertisements. Those days are gone.

What’s the future of TV? TV producers will put out more programming and advertising you have to watch live. There are only so many sports, and not everyone likes watching them anyway. Here are some ways the Networks will try to keep you in front of the “tube.”

1)    Special deals NOW! Advertisers have been lying to us for decades when they say, “Call in the next 10 minutes and you’ll get a special deal!” People know in reality they can call any time. But in the future, those time sensitive offers will be real.  This puts a monetary value to watching live.

2)    More contests with audience participation. American Idol not only put out a good show, but they also started a trend where people have to watch live if they want to vote. Genius. There will be a lot more of that.
3)    More Twitter and social media interaction. TV producers are playing up the connection to social media to get people to communicate with all the other viewers during the airing of the show. This will blossom into full blown Twitter events with cast and crew tweeting with the crowd.

Posted by Michelle Libby at 9:27 PM No comments:

Give Thanks - Time of Year - By Kelly Mank


I absolutely LOVE this time of year and boy does it come fast. I have the honor in helping Santa every year at the Windham Craft Fair which took place this past weekend. I absolutely love seeing all the joy in children when they see Santa (sometimes that joy comes in screaming and tears) the first time. I love seeing the boosters pull together local community members and crafters to put on an amazing craft fair for our town. The holiday music, the cookies and snacks, the gift wrap, all the unique crafts… how could this not put someone into a great mood and into the holiday spirit.

We need to remember that this is also a time of thanks. We should be thankful for our family, our jobs, our friends and the people who we don’t often give thanks to enough. Our town council and committee members, our local public officials, our school teachers and administrators, our volunteer youth coaches, and so many other people who I just wouldn’t be able to fit on this one insight. Please don’t forget to reach out to these people and make them aware that they are important to you and your community as a whole.

I love helping and taking part in food drives and toy collections for families and children in need. Pulling together a community to help individual families give children the holiday they deserve is not only an amazing thing, but also a miracle in the making. There are so many acts of kindness done around the holidays that you just never know how much it truly affects someone and the decisions they are making in their life.

Remember to educate your children on the meaning of the holidays you believe in and celebrate. Be sure they don’t think it is just about getting toys under a tree. Bring them to a food pantry, let them go shopping for toys to donate to children in need, let them help choose a family to sponsor, and most of all love them and show them they are loved. When children feel love they learn how to express love and during the holidays that is so important.

As the retail businesses gear up for their busy holiday season I would like to personally wish everyone have a stress-free holiday preparation season!

Posted by Michelle Libby at 8:15 PM No comments:

Veteran's Day - A special day to celebrate - By Michelle Libby


Growing up Veteran’s Day was a day off from school. I knew it was a special day for some people, but not having veteran’s in my household we didn’t celebrate that I remember. Fast forward 20 plus years.


When I was in college I dated a Marine. He was deployed to the first Gulf War and was gone for nine months. It was hard on his family and hard on me. This was before the instant gratification of email and Skype. I would get a letter dated February 8, that said “Don’t know what’s going to happen, but the ground war is starting tomorrow.” I didn’t get another letter until the following month.

During that time, we attended Marine Corps balls (November 10). Happy Birthday, Marines! And I realized how amazing it was to be a part of the military, regardless that I had a small part. We went to weddings of fellow Marines, where they tap the bride on the butt and say, “Welcome to the Marine Corps, ma’am.”
War isn’t fun. It’s not pretty and for the families who endure at home while their solider is away, they deserve all of the respect and support we can give them.

I married that Marine 19 years ago. After his contract was up, we debated about re-upping, but in the end, he gave it up for me and our daughter. It was a tough decision for him.

As a veteran, he has a different mindset than the rest of us. He wants to be where the action is, protecting his buddies. When he is around other vets, it’s like a club. They all belong and those who don’t…well, they don’t completely understand.

We have a lot of veteran’s in our community, and on Monday, November 11 at 11 a.m, they will gather at the Windham Veteran’s Center to honor one another and celebrate what it means to be a patriot. If you have never been to a Veteran’s Day ceremony, I highly recommend that you attend. There is nothing better than shaking the hand of a vet and seeing the gratitude in his eyes. 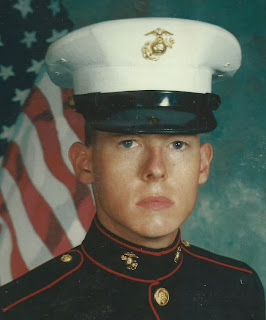 Posted by Michelle Libby at 7:11 PM No comments:

Giving praise to our children - By Kelly Mank


People ask me all the time why I feel the need to turn every situation into a positive experience or life lesson. There are so many answers to this question. Some people even get mad at me when I put a positive spin on everything going on in my life.

My number one answer to this question is: My kids.

I want my kids to grow up thinking that they can do anything and can accomplish anything they put their mind to. Everything worth accomplishing takes a lot of hard work and sometimes takes making decisions that are not always fun to make. When my son or daughter has a friend over who has such low self-esteem and feels like a failure, it breaks my heart. It makes me wonder where it is coming from and why at such a young age they are shaping their life and future for failure.

I guess the reason for my insight is purely to remind people to tell their kids how amazing they are and to encourage them in sports, arts, music… whatever it is that they have a passion for. Encourage them to have fun and to do the best they can possibly do. Our children’s minds have not been polluted by all the negatives in our world. Shape their minds to not only be positive, but live a positive life.
Posted by Michelle Libby at 6:03 PM No comments: