Andy Young: Signs of the time

I may not be the second coming of Charles Darwin, but I’m observant enough to know what time of year it is with just a brief glance out the nearest window. Anyone can tell that it’s winter when there’s snow on the ground, spring when trees are budding, and summer when fully developed leaves are producing abundant shade. 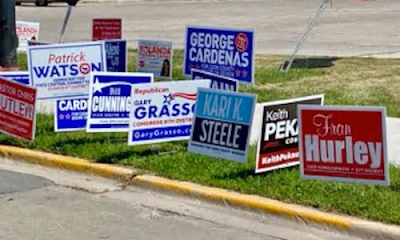 But I can go one better. My inherent ability to recognize nature’s subtle hints allows me to not only divine that it’s currently mid-October, but also that those buses full of leaf-peepers are here to look at Northern New England’s fall foliage during autumn of an even-numbered year.

All of Mother Nature’s bright reds, deep purples, blazing oranges, and many other unique hues appear annually in these parts. But every other year, specifically the even-numbered ones, Maine is overrun with a far less attractive form of autumn color.

Shortly after beginning my daily commute to work, my car and I encounter an octagonal red sign that commands us to come to a full stop. These days while I’m pausing, I can’t help noticing the proliferation of campaign signs at the corner. There are nearly 20 of them, each urging anyone reading them to vote a certain way in next month’s elections.

I understand that name recognition is important for someone aspiring to become an elected official. But I’m not sure littering one’s district (or in the case of candidates for governor or senator, the entire state) with mini billboards is going to sway any undecided voters into casting their ballot for the person whose name appears on them.

The four grassy corners of the intersection at the end of my street are currently home to a wide variety of political signs. Two green ones with white printing on them encourage me and anyone else viewing them to re-elect the person who currently serves as our state representative. But several feet away are three similarly sized placards sporting red and black printing on a white background, urging one and all to vote for his opponent.

On the same small patch of grass there’s also a red, white, and blue board with the name of a person running for the state senate on it, along with three separate but identical purple and white signs with a different person’s name on them, apparently designed to convince me that she is a better candidate than the woman named on the tri-colored advertisement located just a few feet away. There are also signs boosting Maine’s current governor, who’d like another four years in the Blaine House, and a former governor, who’d like to return there.

None of the signage I’ve seen touting political candidates has the word “Democrat” or “Republican” on it. Given current attitudes amongst the voting public, it might be that publicly proclaiming one’s party affiliation would cost a candidate more votes than it would gain them.

I consider this proliferation of political posters a scourge, but others may hold a different opinion regarding the current clutter. All those unsightly but attention-grabbing cardboard notices represent a potential fiscal bonanza for the people who print them every couple of years. Those folks look forward to even-numbered autumns with the same sort of ardor that turkey farmers have for Thanksgiving.

Given the current polarized political atmosphere, I wonder if a Republican sign-producer would take an order to print signs for Democrats, or if a liberal printer would produce campaign literature for conservative candidates.

I bet they would. Because whatever dissimilarities Americans with conflicting political persuasions may have with one another, they also have one important thing in common.

They’re all capitalists. <
Posted by Ed Pierce at 2:06 AM