Andy Young: Prosperity is right around the corner. Thanks, Red Sox! 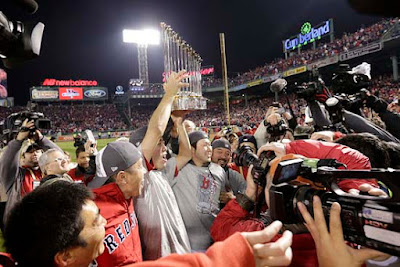 There are, however, certain signs that can help prognosticators detect a coming financial upturn. Happily, for New Englanders, a leading indicator suggests that economic prosperity is right around the corner. In fact, the next few months in general and October in particular are shaping up to be exceptionally productive for business, labor, and consumers in America’s northeastern-most region.

Who’s responsible for this? Well, there’s plenty of credit to go around, but the primary contributor to our region’s impending good fiscal fortunes is Boston’s professional baseball club.

Twelve of Major League Baseball’s 30 teams will take part in postseason play, which starts this week. The Red Sox aren’t one of them, but where the local economy is concerned that’s good news. Really good news.

Last fall Boston won the American League’s wild card playoff game, 6-2, over their hated rivals, the New York Yankees, in a 3-hour, 13-minute contest. That catapulted them into a best-of-five division series against the Tampa Bay Rays, a team that finished eight games ahead of Boston during the regular season.

The team’s falling short of the World Series was no doubt disappointing to Red Sox Nation and its legions of fervent zealots, all of whom are, for whatever reason(s) utterly devoted to the well-paid, constantly-changing mercenaries who wear their team’s uniform each year. But those people aren’t only ardent Red Sox supporters; they’re also the welders, doctors, nurses, electricians, bartenders, merchants, laborers, teachers, police officers, stockbrokers, farmers, shipbuilders, web managers, and others who comprise the area’s consumers and producers of goods and services. In short, they’re the people who make the economy go.

Last fall, Red Sox fans who watched every televised minute of their team’s playoff run spent a total of 41 hours and 29 minutes in front of electronic screens. Tack on the pre- and post-game shows, plus endless hours of commentary from TV talking heads and talk radio blowhards, and it’s no wonder so many New England businesses slumped last October.

Sleep-deprived employees called in sick in droves, and the bleary-eyed workers who bothered to show up after all those late nights were, not surprisingly, of limited use. Those who saw playoff games at Fenway Park in person paid hundreds of dollars for the privilege, and nearly all of that money left the local economy, pocketed by already wealthy players and management, most of whom live (and spend) elsewhere in the off-season.

But all that money will stay in New England this fall. Not only that, but Boston’s failure to qualify for this year’s postseason guarantees employers a motivated, well-rested labor force capable of higher levels of productivity than it was a year ago.

And there’s more good news: given the results of this season’s first four New England Patriot football games, northern New England’s economic good times are likely to continue for the foreseeable future! <
Posted by Ed Pierce at 2:02 AM