The Hollywood portrayal of journalists is often far from reality and despite the glamorous image and stylish depictions in movies and on television, many reporters, editors and sportswriters lead simple and unassuming lives but sometimes are targets because of their careers. 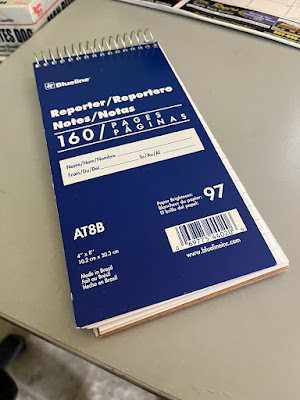 Here's an example from my own life to prove my point.

In the late 1980s I was working as a reporter for a newspaper in New Mexico. A man came to the newspaper office on a November afternoon and asked if he could speak to a reporter about a possible story. I happened to be sitting at my desk at work that day when my editor called me over and instructed me to find out what potential story this man wanted to share with us.

I introduced myself and the man said his name was Gene and that he had a "tremendous" article for me. I sat and listened as he told me that he had been wrongly convicted of shooting at one of his neighbors in Decatur, Georgia and had then served a 10-year sentence on a Georgia chain gang reconstructing highways and moving boulders and rocks by hand.

Gene said he had taken his appeal to the governor's office in Georgia, the attorney general's office there and had paid a family member who was a lawyer a large sum of money to prove his innocence and have his conviction overturned. Apparently, nothing had worked and once he was released from the Georgia chain gang, he had moved 1,400 miles west to New Mexico and was now working in construction.

He told me during his time on the chain gang, his wife had divorced him and married his family member, the lawyer who was handling his appeal in the court system. His mother had also died since his arrest, and he was planning on exposing everyone who had testified against him resulting in what he said was a wrongful firearm conviction.

After hearing his story, I told him I would speak to my editor about it, but I doubted he would have me write a story about this because it had occurred so far away and had little news value to the readers of our newspaper in New Mexico. I then returned to the newsroom, pitched Gene’s article idea to the editor, and I was right, he instructed me to tell Gene it was not something the newspaper was interested in writing about. Gene didn't take my response well and called me a 'phony" and said it was a "typical" reply that he had heard from other newspapers that he had presented the story to.

The very next afternoon, a Friday, I was back at my desk at work when the receptionist informed me that Gene was back and asked to speak to me. I walked out to the lobby and Gene apologized for calling me a "phony" and asked if I'd be interested in writing a book with him about his case. I told him no, I had little free time and was barely keeping my head above water with all my newspaper work. Gene politely thanked me and left, and I went on with my day and continued my work.

That Saturday evening, my wife and I were just about to sit down to supper when we heard a gunshot in our driveway outside. We lived on a remote farm on a dirt road about 17 miles south of the city where I worked. The time had changed the weekend before and it was dark at 5:30 p.m. when we heard the shot and someone hollering for me outside.

My wife pleaded with me to stay inside, but in looking out the window I saw Gene standing in my driveway holding a pistol. I told her to call the police and I thought I could speak to him out there, calm him down and prevent him from shooting out the windows in our home.

I stepped outside and discovered that Gene was quite drunk, and he was also very angry. He called me a “hypocrite” and said I was like everyone else who had not believed his story. He said he was going to show me what it was like to be humiliated and pointed his pistol at me and told me to get down on my knees.

At that point, I thought I was a goner until two sheriff's cruisers pulled in behind Gene's truck and the deputies shouted to him to drop the gun and walk backward to them. He did and Gene was arrested for violating the terms of his probation. The deputies asked him how he knew where I lived, and he told them he looked up my address in the telephone book.

From that point on, we kept the driveway gate locked and removed our listing from the next phone book. It was very scary and difficult to talk about afterward.

Almost four decades later, journalists everywhere face risks and threats every day for just doing their job. I was fortunate to have survived my brush with an unhappy person and can attest to the inherent dangers of this career. <
Posted by Ed Pierce at 2:04 AM