I’ve been looking for a specific person for years, and about a month ago I thought I had found him.

Unfortunately, I didn’t get his name, but I can describe him. 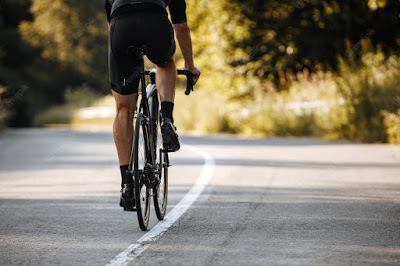 He’s about half my age, stands somewhere between 5-foot-10 and 6-foot-1, and weighs between 170 and 180 pounds. Our paths crossed on the home stretch of a 25-mile bike ride I was taking. The athletic-looking cyclist glided past me like I was standing still. But that happens all the time, so I didn’t have any particular reaction.

Pedaling past me on a titanium bike, he was outfitted like a Tour de France competitor, so he probably wasn’t overly impressed by my ensemble, which consisted of old basketball shorts, a T-shirt, and the long-sleeved, size Triple XL green hoodie I bought because it was 80 percent off. Wearing that hood under my helmet protects what my dermatologist tells me, and my children gleefully remind me of every chance they get, is a rapidly expanding bald spot which needs perpetual protection from the sun.

Doggedly pedaling away on my generic road bike as the mystery cyclist zipped by me like the Roadrunner passing Wile E. Coyote, I turned my attention to the pavement ahead, a section fraught with the sorts of imperfections which, while they’re mere bumps in the road for someone piloting a motor vehicle, are potential teeth-rattlers and/or tire flatteners for self-propelling bikers.

After successfully navigating between potholes and reaching a smoother, wider section of road, I passed him. He was re-mounting his bike after having pulled over to take a quick drink from his water bottle. Going by I gave him a quick wave, knowing he’d soon overtake me on the hill we were about to ascend.

Except … he didn’t pass me. Not for a while, anyway. But when he finally did, he slowed just long

enough to say, on his way by, “Man! You must be in great shape. You kicked my butt going up that hill back there!”

He didn’t have to say that. He didn’t have to say anything. But he took the time to share some words of encouragement that made a total stranger feel like Superman. That spontaneous bit of altruism was what led me to believe that my lengthy search was over, and I had finally located and identified the world’s kindest person.

But then a wonderful individual bought a copy of the book I just had published, plus five additional copies to give to her friends. Then the week after I wrote a column in this newspaper bemoaning the lack of vegetarian ramen in local stores, someone mailed me a dozen packages of the stuff. Shortly after that a man let me in front of him at the grocery store checkout counter when he saw I only had two items. Then there’s the fellow who periodically sends me vintage baseball cards while expecting nothing in return, the student who, with no apparent ulterior motive, brought me the world’s best cookie, and the old friend who, for no discernible reason, sent an amazing letter informing me that I am

All these random acts of kindness have me somewhat conflicted. Here I thought I had solved the
mystery of who the world’s kindest person is, but subsequent developments have left me more confused than ever about this individual’s identity.

I’m probably no closer to locating the world’s kindest person than I was when I began my quest to find him, her, or them a few decades ago. But for now, I’m perfectly happy to continue enjoying the search. <
Posted by Ed Pierce at 2:02 AM