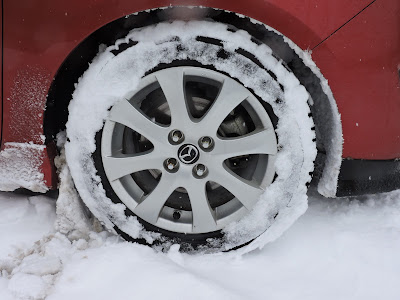 As a young man, my father taught me many helpful things about how to manage issues in life, but he never mentioned always checking to ensure mechanical work that I’ve paid for was completed properly.

That would have been good to know several weeks ago when a bad storm struck our area on a Friday. As a nor’easter dumped major snow and ice on our neighborhood, I parked my wife’s car in the garage and left mine outside to endure the brunt of the blizzard.

As the vehicle sat in the driveway, apparently some moisture entered my right rear snow tire valve stem and when the temperature dropped into the single digits overnight, that moisture froze and cracked the tire valve, and I never knew it.

While I cleaned my car of snow and ice Sunday morning so I could go to the grocery store that weekend, I never saw anything out of the ordinary but on my way back from shopping, the low tire pressure light came on my dashboard alerting me of trouble. I pulled over and walked around the vehicle to discover my right rear tire needed air.

That Sunday afternoon, I called the tire store where I had purchased the set of snow tires. I originally thought I would need a replacement snow tire and wasn’t aware of the valve issue. The tire store manager said he would have to special order a replacement tire and to give him a day to have it delivered in a shipment from out of state. For this particular week, Monday was a legal holiday, and I didn’t need to move my car in the driveway because my wife was off from work that day.

Early Tuesday morning, I pulled my car onto the street to then move my wife’s car out of the garage so she could go to work. In doing that, I noticed that my right rear snow tire was nearly flat. I decided that it was too risky to drive the car several miles to the tire store.

I called AAA for a tow to the tire store and when the tow truck driver arrived, he informed me that there really was nothing wrong with the snow tire, my problem was a cracked tire valve stem from the ice.

He filled the tire with air and loaded my car onto his rig for transport to the tire store. While the tow truck was enroute to the tire store, I called the tire store manager and let him know that I didn’t need a new snow tire, but instead required a valve stem replacement for the nearly flat right rear tire. He told me they’d fix it and it was a good thing because the shipment of snow tires was running behind and they were having difficulty finding another 205 65R 16 snow tire to fit my vehicle.

About an hour later, the tire store manager called and said the work had been finished and I could pick up the car any time. When my wife arrived home from work, she dropped me off at the tire store and I told her that she didn’t need to wait for me because I needed to go to another store afterward to get an item for dinner that I had forgotten during Sunday’s shopping excursion.

I paid the tire store manager my bill of $30.98 for the valve stem replacement and he handed me my keys. I did a quick walk around the car and all tires seemed properly inflated. I was happy to have gotten away from the situation so inexpensively and didn’t have to buy a new snow tire, which had been quoted to me for a price of $148.

On the way to and from the store everything was fine and so I was surprised the next morning when I started my car to go to work and the low tire pressure light was on again and the right rear tire appeared to be losing air once more.

I drove to the same tire store and the manager directed me to pull up by a bay where he could add air to the tire. He took the cap off the tire stem to add air and stood up and walked to my right front tire. He then said, “Well there’s your problem.”

It seems the mechanic the day before had thought the right front valve stem needed replacing, instead of looking at the nearly flat right rear tire. The tire store manager apologized and said they would replace the right rear tire valve stem at no charge to me promptly.

About an hour later I was back on the highway headed to work and since then the tire and valve stems on both my right rear and right front tires have stayed properly inflated.

The lesson to be learned here is that sometimes what is plainly obvious is not always obvious to others. I’ve determined that I’m always going to inspect work performed on my vehicle and that I need to find another tire store to purchase and service my tires in the future. <