It seems the older I get, the easier it becomes to find Christmas gifts for my wife.

Of course, it helps to be married to a voracious reader who tells me that she’s just as comfortable receiving used books from Goodwill as she is at reading new novels just released on Amazon. 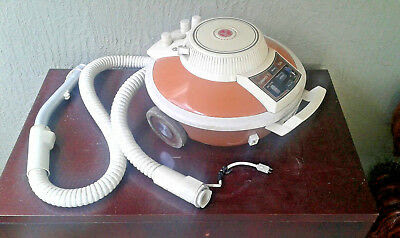 Before we got married, the only woman I had to shop for in my life was my mother, and I had it down pat what to buy for her every year. She enjoyed chocolate-covered cherries, a bag of fresh navel oranges or grapefruit, and a gift certificate for dinner at Olive Garden.

In the years since I’ve been married to Nancy though, I’ve expanded my holiday shopping repertoire to now include jewelry, clothing, shoes, winter coats, and sweaters. She’s easy to shop for and grateful for each gift she receives.

For me that hasn’t always been the case. Way back in the 1970s when I was married to someone other than Nancy, I found it much more difficult to shop for her as she was very picky about nearly everything.

One year when I was working at a department store assembling items purchased by customers such as bicycles and kitchen stepstools, I happened to see two very good deals nearby on the showroom floor.

The first one was a Hoover Celebrity canister vacuum cleaner on sale for just $39 and the other item was a Symphonic stereo receiver with a built-in cassette tape player and two large speakers for $135. However, making just $2.75 per hour performing assembly work and going to college to study journalism at the same time resulted in a miniscule budget, preventing such lavish purchases, even at Christmas.

When I told the salesman that I was considering buying both the stereo and the vacuum for my wife for Christmas, but that my funds were limited, he suggested that I apply for the store’s easy credit plan.

I went into debt and brought both items home and wrapped them for her for Christmas and placed them under the tree. Her reaction on Christmas morning was priceless and I didn’t realize anyone could get so mad on such a special day.

The first gift she opened was the vacuum cleaner and I quickly learned that a husband should never purchase items meant for housework for his wife. And she also told me that she preferred upright vacuums more than the canister type because they worked better and picked up more, according to her.

She said that the stereo was obviously something that I wanted and showed little regard for her feelings. She said that she wanted a bottle of “Charlie” perfume instead and demanded that I return the stereo and get my money back as soon as the department store reopened the day after Christmas.

But when I informed her that I had opened a revolving charge account at the store to purchase those gifts, she became even more upset than she already was. I was told that the decision to open a charge account should be a mutual decision when you are married and how foolish I was to think a stereo receiver and a vacuum cleaner were something that she would ever want for Christmas.

So thereafter, I always made it a point to set a spending limit and to have her write her clothing sizes and wish list on a scrap of paper before I headed off to the mall for Christmas shopping, usually on Christmas Eve.

A lot has changed in my life since the 1970s. I am now married to a kinder person who has never complained about a Christmas gift given to her. We do try to establish spending limits every year, but those limits always seem to evaporate when I am choosing gifts for her.

By this point approaching two decades of marriage, I do know her sizes by heart and have a good idea of what she likes and what she doesn’t like. I can’t go wrong in purchasing pajamas, books, teaching supplies, creative pursuits, or gift certificates to Staples.

Being a teacher, one year she was thrilled to find a wrapped box of copy paper and a four-pack of computer printer ink under the Christmas tree with her name on it. Another year she found two cashmere sweaters and a pair of Skechers sneakers in her hard-to-find 5 ½ wide size.

The best thing about Nancy is that I could go to a thrift shop and spend $30 for Christmas. and she would be as happy as me buying her an expensive new wardrobe from Macy's.

I suppose that I’ve refined my Christmas shopping skills as I’ve aged, but it sure helps to have someone who understands the meaning and intent of the season to shop for.

In my opinion, Christmas shopping should be fun and not stressful. It should be done to express your sentiment for that person and not an obligation. Whether it be a summer sausage gift basket from Hickory Farms, an oversized mug for hot chocolate, Bohemian aromatherapy candles, or tickets to a hockey game, it’s the thought that counts, right? <