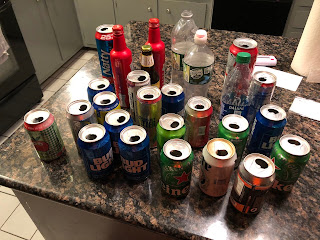 Since Maine’s six-week spring is still five (or more) months away, on a recent unseasonably warm Saturday I filled my water bottle, grabbed a couple of snacks, and headed out on my bicycle for what I anticipated would be a bracing and relaxing late-season ride over some lovely, seldom-traveled country roads.

But what should have been a treat was spoiled by something (or more accurately several things) I picked up along the way. Thankfully, it wasn’t a strain of Covid 19, or any other dread disease.

But what I did acquire was nearly as unpleasant. A fifteen-mile trek that shouldn't have taken much more than an hour was made considerably longer because I had to dismount numerous times in order to pick up far too many randomly discarded aluminum cans that formerly housed 12 or more ounces of Bud Light, Michelob Ultra, Miller Lite, Hurricane Malt Liquor, Goose Island IPA, Twisted Tea, Sprite, Dr. Pepper, Diet Coke, and Red Bull. I also grabbed bottles that once contained Gatorade and Vitamin Water. Even more infuriating: I left at least twice as many bottles and cans as I picked up because I didn’t have any room left in my backpack.

I’ve attempted to come up with a sensible rationale for littering. But try as I might, I cannot conjure up a single decent reason for tossing detritus out one’s car window. And it’s not just me who thinks this way. Nobody finds laziness, arrogance, selfishness, and wanton disregard for Earth and its denizens even remotely attractive, nor does any decent person boast of his or her garbage-scattering abilities. So why is it that roadsides are blighted by refuse in general and empty libation containers in particular? I’m not suggesting prison time for litterers, but clearly something needs to be done.

Here’s a thought: how about upping the amount drink-buyers need to deposit on each bottle of liquid refreshment they purchase?

Maine’s bottle bill program began in 1978, when buyers began paying a 5-cent deposit on glass, metal, and plastic beverage containers. But according to the Bureau of Labor Statistics, thanks to inflation and the passage of 43 years, those five 1978 pennies are currently worth approximately 21.2 cents. So how about raising the deposit on drink containers to a quarter per vessel?

Bottlers and drink sellers would likely fight such a proposal, contending this “new tax” would be unjust. But that argument is demonstrably spurious, since the new rate wouldn’t cost consumers a thing if the bottles and cans are returned, a course of action consumers are more likely to perform if failing to do so will set them back not one nickel, but five.

Of course, the real reason bottlers, brewers, and purveyors of other liquid refreshments might oppose such legislation would be the possibility, however slight, that upping the deposit on bottles and cans might move some folks to purchase alcohol, caffeine, and/or sugar-laced products less frequently. Or -gasp - perhaps not at all!

But perhaps this situation will ultimately be more boon than blight. Contemporary America is stridently divided on issues ranging from vaccinations to abortion to guns. Who knows, maybe this is the topic that can unify the nation. Opposition to littering is something Democrats, Republicans, Conservatives, Liberals, Christians, Muslims, the LGBTQ+ community, environmentalists, venture capitalists, and people of all skin tones all can all agree on, since being pro-littering is only slightly more politically expedient than being pro-pornography, pro-leukemia, or pro-Sandy Hook-was-a-hoax.

In 1975 the Captain and Tenille sang “Love Will Keep Us Together.” Could it be that 46 years later, trash will bring us together? <