It’s officially time to return to my soapbox for one of what my wife Nancy calls my “Old Man Rants.”

I have long admitted to being a devoted television watcher and learned to tell time by what soap operas appeared on the TV screen as my mother ironed in the afternoons in the 1950s. Through the years I’ve come to appreciate an often-overlooked aspect of television programming – television theme song music. 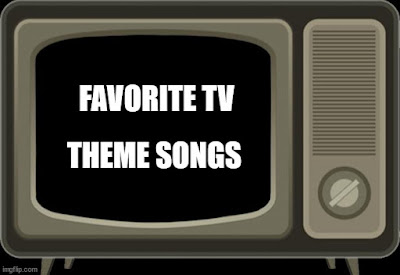 If I were to ask for a show of hands right now, I believe that a majority of members of my generation can sing the theme song for Gilligan’s Island and have known the words by heart since that show first appeared in the 1960s. And even those Baby Boomers who aren’t into singing can probably whistle the theme music for The Andy Griffith Show, even though original episodes for that program last aired in 1968.

Television theme music can connect us to a different day and age and remind us of our childhood or good times spent with friends and family watching our favorite shows no matter when we watched them.

Some themes made me laugh, some made me cry, some inspired me, and some drew my focus to the show’s opening credits which rolled by as it played. There have been highly annoying TV themes and rousing instrumentals that had me riding along on the range with my favorite cowboy stars of years past.

I can recall sitting in our family’s living room on a Saturday evening in 1970 and hearing the “Love Is All Around” theme of the Mary Tyler Moore Show for the first time. Or listening to Sammy Davis Jr. belt out “Eye of the Sparrow” for another episode of Baretta a few years later.

A TV theme song also became the bane of my existence during junior high school as friends and classmates would walk past my locker singing “A horse is a horse of course of course, and no one can talk to a horse of course. That is of course unless the horse is the famous Mister Ed.” I heard that one so much I couldn’t watch that show for years afterward.

Loved the theme to The Muppet Show. When I would hear the opening notes, I would get pumped up to laugh and enjoy another half-hour of comedy.

My mother liked watching All in the Family but she would always complain about how Carroll O’Connor and Jean Stapleton would warble out “Those Were the Days” at the opening of the show each week. For years, she would always gripe that Jean Stapleton was a terrible singer and how she couldn’t understand why they picked her to sing that theme song. And every time she complained, I always told her it was a send-up, and that it was meant to be a family sitting around the piano together singing regardless of their vocal ability, hence the show’s name All in the Family.

And for television shows that had themes I couldn’t sing along to, I would get ready for a riveting time ahead through the instrumental versions of theme songs such as Bonanza, Perry Mason, Cagney and Lacey, Taxi or Hawaii Five-O.

In watching countless hours of television through the years, I’ve lost track of how many great theme songs there have been. A partial list of ones I truly liked included the opening music of shows such as Cheers; WKRP in Cincinnati; Happy Days; Friends; The Jeffersons; SWAT; Green Acres; The Partridge Family; The Addams Family; The Flintstones; The Monkees; Hill Steet Blues; The Rockford Files; and Rawhide.

If you visit any flea market this fall, many will have a CD booth that will inevitably offer a “TV Theme Greatest Hits Collection” that will include the theme songs to Lost in Space; LA Law; Beverly Hills 90210; Laverne and Shirley; The Love Boat; The Lone Ranger; One Day At A Time; The A-Team; The Facts of Life; and Welcome Back Kotter.

Ok, here’s where my rant comes in. Somewhere along the way in the 21st century, television executives determined that TV theme songs are no longer needed. What’s left are 15 seconds of a series title card or a tiny snippet of music and it’s robbing the viewers in my opinion.

The theme to Ted Lasso was co-written by Marcus Mumford of “Mumford and Sons” but you only hear about 15 seconds of it for the opening of each episode.

Don’t get me started about the theme for ABC’s Lost. That show featured a beautiful orchestral score for every episode, but the opening theme was nothing more than a hideous mechanical screech as the show’s title flashed on the television screen turning sideways.

Now in the days of Smart TVs and the creation of the “Skip Intro” button on the remote, viewers no longer feel they need to be subjected to TV theme songs, I suppose.

But despite the technology and the ability to advance beyond the credits, I still watch Tony Soprano light his cigar coming out of the Lincoln Tunnel, grab the ticket for the New Jersey Turnpike while “Woke Up This Morning” by Alabama 3 plays before each episode of “The Sopranos.”

Listening to television theme songs is a hard habit to break. <