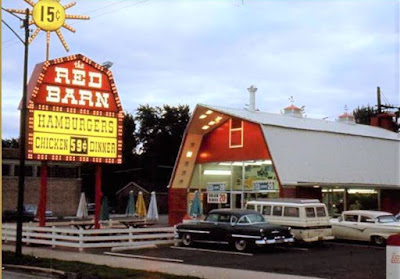 Scientists claim that there is a pronounced connection between the sense of smell and nostalgia, but I also suggest a link between nostalgia and the sense of sight.

Sometimes both senses can return me to the world of yesterday and good times I’ve enjoyed in the past.

I was recently in the baking section of a supermarket and saw a bakery worker taking a tray of freshly baked hamburger buns out of the oven. For just a second, the aroma of the hamburger buns brought me back more than 50 years to a diner that my father used to take our family when I was little.

The place was called the Quonset Inn and it was a converted World War II military surplus structure that had been moved and converted into a popular eatery and bar. My father always would enjoy hot dogs and milkshakes there, but I would always order a hamburger, fries, and a Coca Cola each time we visited, which was usually every Friday evening after he got off work.

The hamburger buns were always soft, buttered and toasted and loaded with sesame seeds and quickly became my favorite part of those meals. When we moved across town as my father took a new job in the mid-1960s, our visits to the Quonset Inn became more infrequent and eventually we moved out of state leaving their wonderful diner food behind.

It was still there when I returned home when I was serving in the U.S. Air Force in 1977 and I stopped in and had a hamburger just for old time’s sake before boarding a plane headed overseas for my next duty assignment. The burger tasted exactly like it had years before and the hamburger bun was still baked fresh on-site daily as in the past.

But soon thereafter the Quonset Inn closed their doors, and the location is now a hobby shop offering “Painting with a Twist” among various recreational classes conducted there.

Flash forward decades into the future with me standing in the bakery department of a supermarket in Maine and the whiff of freshly baked hamburger buns reaches my nostrils. It instantly reminded me sitting in the old Quonset Inn and being served a hamburger there and how it smelled upon arrival at our table.

Several days later, a different nostalgic connection prompted me to think of another restaurant I hadn’t thought of in years. (Are you sensing a trend here?)

I happened to open one of those annoying click-through Facebook pop-ups about closed restaurant chains of the 20th century. There among the 20 or so restaurants listed was a photo of another place our family frequented, the Red Barn.

Both my brother Doug and I loved going there for their chicken dinners. It came in a colorful red cardboard box fashioned into a replica of a red barn and looked like the exterior of the restaurant building itself.

As I recall, their chicken was broiled not fried and was very juicy and tasty. They also offered a variety of burgers including a “Big Barney” and a huge burger sandwich called “The Barnbuster.”

French fries at Red Barn were a meal all to themselves. They were longer and skinnier than you might have been accustomed to and always crispy on the outside but mouth-watering on the inside. If you chose to order a multiple-piece chicken dinner, you also received some of the best coleslaw you’ve ever tasted along with your meal.

(Side note: As a connoisseur of coleslaw since I was a child, the best coleslaw is light on the mayonnaise, lightly seasoned and comes finely chopped.)

At one time there were more than 400 Red Barn restaurants in some 19 states across America, but by the late 1980s the chain closed its doors for good leaving behind a trove of childhood memories for aging baby boomers like me.

Now in 2021 sitting at a computer screen in Maine, I clicked on a photo of a Red Barn restaurant in its prime in the 1960s and was instantly taken back through time to sitting in the dining room of the one on Scottsville Road in Rochester, New York with my parents and my brother enjoying some of their chicken on a Saturday evening.

Therefore, as scientists continue to probe the connections between odor-evoked memories, psychology and emotions, my own personal experiences confirm for me a link between visual reflection and days long gone.

When I close my eyes, the passing of time doesn’t diminish my memories of growing up and eating at those restaurants, or how good their food truly tasted. To this day, my sight and smell can confirm that. <