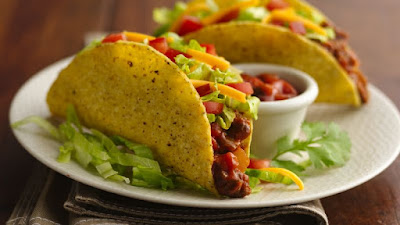 Somewhere along the way I’d like to think that I’ve learned a thing or two having reached my advanced age.

It seems my process of learning never stops, and I’ll cite for you some specific examples.

On Monday evening, I learned the hard way that cooking Mexican food is better accomplished on the stove or in the oven, rather than in the microwave and to always read the directions listed on the package. Let me explain.

A week or so ago, on my latest trip to the grocery store, I passed by the Mexican food section of the store and thought I’d try some of the “Stand and Stuff” variety of tacos. Tacos are easy to make, you fry some hamburger meat, add water and the taco seasoning, heat for a few minutes and warm the taco shells.

However, when I retrieved the “Stand and Stuff” box from the kitchen shelf where they had been stored on Friday night, I discovered that the package only contained taco shells and nothing else. I had purchased the wrong box, thinking it was the taco kit, which includes taco shells, taco sauce, and the taco seasoning mix. By the time I had gotten out the box to make dinner, both my wife Nancy and I were worn out from long days of work and neither one of us wanted to go back to the store for a lone package of seasoning mix. Instead, we called in a take-out order from a restaurant and set the “Stand and Stuff” package aside for a few days.

Lesson Learned Number One: Always read and examine the package before tossing it into my shopping cart.

On Sunday, I returned to the grocery store and this time I made sure I arrived back home with not one, but two packages of taco seasoning mix. I also decided to purchase a can of refried beans to accompany our Mexican food extravaganza the following evening.

This time everything was going well with the preparation of the Mexican food. I had all my ingredients and had even remembered to obtain shredded lettuce and shredded cheese for toppings. If it was just for me, I would have gotten some fresh tomatoes, but I know that my wife has a tomato aversion, so I neglected to purchase some of those as taco toppings.

As the hamburger meat was frying on the stove, I opened the can of refried beans and knowing that my wife wouldn’t eat them, I put the beans in a dish and intended to warm them up in the microwave closer to when the meal was going to be served.

To heat the taco shells up ahead of time, the directions on the “Stand and Stuff” package recommended heating them on a flat metal baking sheet for eight minutes at 350 degrees. Since I had already started frying the hamburger meat, I chose not to heat them that way. It would have taken our oven at least 10 minutes to reach that temperature and the meal preparation was well under way.

I decided to warm the taco shells in the microwave oven for one minute total. Usually when I do that, the shells come out crunchy and are ready in less time than waiting to heat them up in the regular oven. However, as the minute ticked off the microwave clock, I tended the hamburger meat on the stove but could sense something was wrong. The timer on the microwave sounded and when I opened the door, the bottom of two of the taco shells were black and burned.

My wife appeared in the kitchen asking if something was burning and I gave her a quizzical look having substituted new and unburned taco shells and buried the charred ones in the trash.

The final part of the meal was heating my refried beans as we were finalizing the meal by placing the taco meat inside the taco shells and adding the toppings before sitting down to eat. I put the dish containing the beans in the microwave and once again, set the time for one minute.

It did not take very long before I started to hear popping sounds coming from the microwave. Opening the door, I noticed that the beans had exploded all over inside the microwave, leaving me with a horrible job after dinner of scraping crusted-on beans from inside the device.

Despite all of the trouble in preparing the meal, my wife and I enjoyed our dinner and I spent 15 minutes afterward cleaning out the microwave. Seems my learning process never ends. <