Insight: Ghosts of Halloween Past 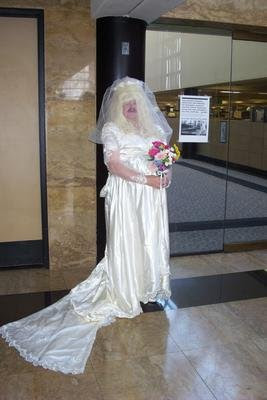 Growing up I always looked forward to wearing a costume for Halloween, but to be honest, I’d rather have the bag full of candy than spend hours debating about what to wear when going trick or treating.

Our family lived in a large tract subdivision with many houses and streets available for visiting on Halloween. These were the early 1960s, prior to the arrival of fun-size and mini-Halloween candy, so virtually every treat handed out in my neighborhood was of generous proportion, except for the occasional apple tossed in my bag.

This was also before McDonald’s and Wendy’s first opened for business, so I never received a gift certificate for hamburgers or fries in my Halloween bag either when the evening’s haul was examined closer.

One year my mother went to Woolworth’s and bought my brother Doug and I some Casper the Friendly Ghost costumes, but by the time the next year had rolled around, those outfits were too small for us, so she made us costumes instead. That consisted of her buying terrycloth bathrobes and coloring them purple with RIT dye in the washing machine.

Once the bathrobes were a shade of bright purple, she put Elmer’s Glue on the collar and shoulders and then sprinkled gold glitter over the glue. She added a gold sash and fashioned a king’s crown out of one of my father’s shoeboxes. Like the robe, she gave the crown sparkle by using glue and gold glitter.

That year we went trick or treating as kings. It just so happened that a few months later I was able to recycle my costume for my role as one of the Three Wise Men in the Our Lady of Lourdes School’s annual Christmas Pageant.

I can recall another year when I was about 10 when my brother went trick or treating as a hobo wearing a long old black coat, a bandana and his face covered with charcoal to appear dirty. That same year I was a cowboy with a brown vest, brown chaps, and a brown cowboy hat. To complete the look, my father painted a mustache on me using brown paint from my Paint-By-Numbers watercolors set. Looking back, it was an outrageous outfit and reminds me now of the “Cowboy” representative of the Village People band of the 1970s.

For some reason my mother seemed to always suggest dressing me in a clown costume for Halloween, an abhorrent idea that I always instantly rejected. To this day I loathe clowns and have little respect for anyone named Winky, Bobo, Bubbles or Jingles.

Many of the boxed Halloween costumes of those days were made of rayon, which made them extremely itchy and hard to wear after several hours.

I remember one boxed costume set I talked my father into buying for me was a skeleton outfit and another year he agreed to buy me a “Hot Stuff the Little Devil” costume at McCurdy’s Department Store. The little devil attire came complete with devil’s mask and a plastic pitchfork too.

Through the years I went trick or treating as a wizard, a policeman, an astronaut, a magician, a pirate and one year as the cartoon character Underdog.

As I got into my teens, the last time I went trick or treating I wore a King Kong rubber mask I had purchased with my own money I had earned from delivering newspapers on my after-school paper route.

Years passed before I attempted to wear a Halloween costume as an adult. Sometime in the 1980s I remember attending a party with my wife and we went as a gangster and the gangster’s girlfriend, with my wife wearing a men’s grey suit, a fedora, and an orange necktie, while I wore a bright yellow dress and a Carol Channing-style blonde wig.

Years later the newspaper I was working for in Florida had an annual Halloween costume contest for employees and for three years in a row, I won that event with an assortment of humorous outfits. One year I was dressed as an old woman with a paisley dress, a gray wig, a hairnet and a walker and I followed that the next year with a Michael Jackson costume that featured a dyed chef’s jacket, black wig, and sunglasses. I donned a Flavor Flav outfit with a horned helmet, a zany lavender blazer and large clock hanging from my neck for the year after that.

The last Halloween costume contest I entered there, I went as a pregnant bride and wore a size 20 wedding dress I had ordered from eBay and a long blonde wig. Unfortunately, that costume didn’t win, but the looks I received from the newspaper circulation manager while changing into it in the restroom before the contest were priceless to say the least.

I won’t be wearing a costume this year to answer the door for a new generation of trick or treaters, but at least one tradition will endure at our house. In a throwback to my youth, we have three boxes of full-size candy bars to pass out to kids while admiring their imaginative costumes. <