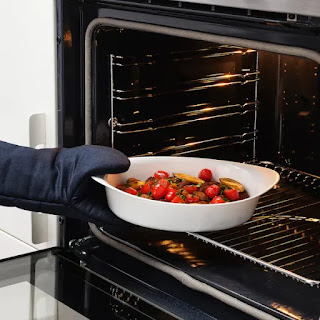 Six years ago, my family and I moved to a new residence.

Okay. The home was built in 1969. But the important thing was that it was new to us.

The previous owners had left the place in immaculate, move-in condition. There was a functioning washer and dryer, a working refrigerator/freezer that dispensed cold water at the push of a button, and a stove that looked like it had just come off the showroom floor. The furnace was still operable, despite being nearly half as old as I was. In fact, our idyllic new living quarters had only one minor shortcoming.

The first time I attempted to turn the oven on I heard a strange buzzing noise, and saw an odd glowing red orb begin spinning on the appliance’s electronic screen. The troubling sound became more disconcerting when I opened the oven door and discovered the temperature inside it was still the same as it was in the rest of the house. I tried shutting it off and turning it back on but got the same disappointing result.

My instant-gratification-seeking children demanded a quick fix, suggesting that I call a repairman. But as the head of household and chancellor of the exchequer, I wasn’t jumping at any hasty remedies. Taking a deep breath, I explained that getting a repairman to make a weekend house call would be even more prohibitively expensive than it would be on a weekday. I also pointed out we had a $5 toaster oven I had procured at a yard sale, plus an almost-new microwave, and that the combined uses of those two items were nearly as numerous as those of a functioning oven would be. I concluded by cheerfully telling them that until it was fixed, our oven would serve as the world’s largest breadbox.

Life in our new abode turned out to be nearly as heavenly as it would have been with a fully operational oven. Although there’s a limit to how many frozen French fries one can prepare in a toaster oven (about 14 per batch), having a breadbox capable of housing bagels, crackers, potato chips, tortilla chips, pita bread, taco shells, and several other items simultaneously was a luxury few families besides ours could boast of.

That arrangement sufficed for about 18 months, until one day when something went terribly wrong with the washing machine. Doing our laundry in the sink was out of the question, so I called a repairman, who came out to assess the situation. After confidently assuring me the problem with the washer would be an easy fix, he asked if there was anything else he could look at while he was there. Seizing the opportunity, I described the situation with the oven. He agreed to have a look at it, and for no extra charge.

A half-hour later the repairman proudly told me the washer and the oven were both good as new. Expressing my sincere thanks, I asked him what exactly had been wrong with the oven. “You really want to know?” he asked. “Lay it on me!” I responded ebulliently.

“Nothing was wrong with it,” he said, with as straight a face as he could muster. “That dial on the display and the buzzing sound? That’s what ovens do when they’re warming up.”

We had needlessly gone without an oven for a year and a half. But as I told my children, life had been just fine without one, plus it didn’t cost anything to get it fixed.

Except for the $6 it took to acquire a new breadbox at a yard sale. <