Seems every time I visit one of my favorite British tabloid websites online lately, there’s always a headline and article about how insects have predicted a sudden storm or a weather catastrophe somewhere in the world. 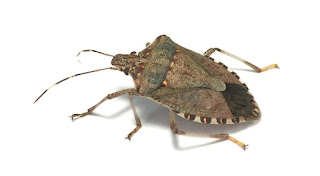 I’ve been reading newspaper articles since I was young, but I’ve only noticed this story subject appearing on that tabloid’s website just in the past year or so. Can there really be something to this or is it merely playing on reader’s worst fears about intelligent insect life plotting to undermine human existence by predicting the weather?

Here in Maine, dealing with insects and arachnids is a fact of life for many of us. We’ve got an abundance of ticks, black flies, mosquitos, caterpillars, moths, bedbugs, beetles, millipedes, stink bugs, fleas, cockroaches, gnats, spiders, ants, earwigs, and many more creepy crawlers sharing space with us in the Pine Tree State.

But have you ever heard of a local insect species accurately predicting an unexpected summer downpour or an early fall snowstorm? I certainly haven’t, but that doesn’t mean there isn’t some merit to that notion.

My father grew up on a farm in New York state during the Great Depression and I recall him telling me once that if I ever see a bunk of houseflies clustered together on a window screen or the outside of a door, it probably means cold weather is right around the corner.

When I was living in New Mexico, I heard some old folklore stories passed down through the generations suggesting that honeybees and butterflies know when it’s going to rain and find suitable places to hide to stay dry. That’s why you never see bees when it’s pouring outside or hear of people being stung during a rainstorm, according to that folk legend.

A real estate inspector in Virginia once told me that termites can sense the season by the temperature and ramp up their activities in the summer to take advantage of peak season warm weather. Because it’s so cold in the winter in Maine, pesky ants and stinkbugs can tell when the temperature is dropping and usually make a beeline for the first convenient opening they can find into your residence.

Again, I do not put much stock in old wives’ tales, but who’s to say these stories didn’t have some legitimate basis for being perpetuated through the centuries?

A little internet research confirms that ticks employ a sophisticated detection system to latch on to new victims. Ticks are known to find their hosts by detecting an animal or human’s breath and body odors, or through sensing body heat, moisture, and vibrations. Some ticks are even able to select a place to patiently wait for new prey through the identification of well-traveled paths by potential hosts.

Another article I read this summer on that same British tabloid website mentioned that a 2014 study in North Carolina found that some honeybees spend a great deal more time out of their hive looking for nutrients on sunny days than on days when a substantial rain is about to fall. This must mean that honeybees are intuitive and somehow know when it’s going to rain, the article speculates.

From everything that I’ve read about insects and weather forecasting, I’m convinced that British readers must have a profound fascination with both insects and weather to find this topic so compelling that it’s appeared more than eight different times since 2019.

Not so much across the pond though. It’s been my experience that the most widely read newspaper or magazine articles about insects and arachnids in America typically are negative and include details about harmful species, swarms of flying grasshoppers, destructive aphid attacks, chirping cicadas, Bugnados, invasive fire ants, murder hornets, emerald ash borers and toxic browntail moth caterpillar hairs.

Negative depictions of insects have permeated throughout our culture too, including popular films like “Silence of the Lambs,” where the sinister serial killer Buffalo Bill leaves African death’s-head hawk moths behind in his murdered victims’ throats until he is stopped by the heroic FBI agent Clarice Starling.

In my opinion, insects receive little credit for all the good they do, such as pollinating crops, providing a food source for fish and birds or helping the environment. The world is a more beautiful place because of colorful butterflies or lightning bugs. Not really a fan of wasps, hornets or spiders but I’m sure they do serve some sort of constructive purpose in nature.

As for insects predicting the weather, my contention is that a much more reliable result is probably available from an app on my smart phone. <
Posted by Ed Pierce at 2:02 AM