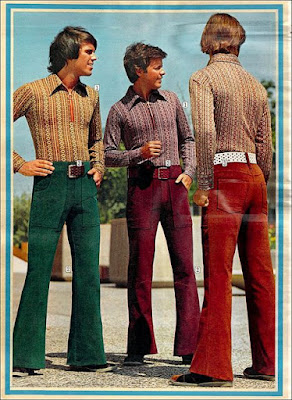 At this stage of my life, I can barely recall what I had for dinner last night, let alone remember what I was wearing 50 years ago. But it looks like I might have to.

Earlier this year, I received an email from my high school classmate Janet Magraw Howland, who’s organizing our 50th Class Reunion to be held in Rochester, New York on the evening of Friday, Oct. 29. The Class of 1971 at Rush-Henrietta High School was supposed to hold our 50th Reunion in July, except those plans were scrubbed by the pandemic and pushed back to October.

In her email, Janet mentioned that reunion attire is expected to be clothing styles of the 1960s and 1970s. Unfortunately, the last of those debonair duds disappeared from my closet by the early 1980s as my waistline continued to expand as I got older.

The more I think about it, much of what I wore back then would probably not be suited for a reunion type of event. I remember really being into simplicity after graduating from high school and wearing colored T-shirts and denim farmer’s overalls throughout much of college. I also owned a snazzy pair of light purple Levis casual slacks which I threw away one summer about 1975 after I stained a redwood fence while wearing them and a lot of redwood stain ended up on them instead of the fence.

Now that I think about it, I also purchased a pastel pink sportscoat resembling one worn by Don Johnson on the Miami Vice television show, but that was in the mid-1980s, and I don’t think it would officially count as 1960s or 1970s clothing anyways. Seems to me I remember parting with that jacket after a can of motor oil inadvertently leaked on it in the trunk of my 1974 Honda CVCC.

Many of the fashionable shirts of the day for young men my age featured dazzling colors and bold patterns and were typically made of polyester. I wasn’t a fan of polyester because it was too hot and felt like I was wearing Saran Wrap. This was also the heyday of extra-wide bellbottoms and tall platform shoes, and I confess to owning some of those.

In 1973, I had purchased a pair of cherry red platform shoes from Kinney Shoes that I got married in and I never wore them again, although they sat on the floor of my closet for more than a decade and a half before I realized they weren’t coming back into style, and I relented and gave them to the church thrift store.

My collection of extra-wide bellbottoms was extensive. I had some in blue, green, brown plaid and a rusty orange shade. The reaction I got from my U.S. Air Force instructors at basic military training when I showed up wearing bright banana-yellow extra-wide bellbottoms was priceless though. They nicknamed me “The Disco Kid” which I grew to despise, and I made sure that the first chance I had to dispose of those bellbottoms, they found their way into the dumpster at Lackland Air Force Base in Texas.

When I graduated from high school in 1971, men’s shirt collars were long and pointy, and it was the height of fashion to wear a shirt featuring a paisley pattern which sort of resembled small amoebas. The last time I noticed anyone wearing a paisley shirt was the character Huggy Bear on the old Starsky and Hutch television show from the late 1970s.

Giant belt buckles were a trendy fashion statement for men in the 1970s. I had several metal-cast belt buckles, one which said “Coors” and the other with a running horse.

I do know I still have some western shirt button covers which I used to wear when I went dancing on Friday nights at the discotheque. The button covers were made of molten nickel and remolded into a sunflower design. They clasped over the existing button and were prone to falling off, especially if an intense disco tune like “Funkytown” was played, meaning extended time on the dance floor. They have been in my jewelry box since 1987.

And to go with my suits, I had a generous assortment of neckties, many of them nearly as wide as the lapel on my suitcoat. Most of those neckties were made of polyester and came in wild shades and styles. My first job working for a newspaper after getting out of the Air Force in the 1980s required me to wear a tie every day and I preferred the post-disco one-inch leather ties or woven fabric ties that were squared at the bottom. That was about as fashion conscious as I got back then.

So, it’s with some trepidation that I start thinking about what to wear to this 50th reunion. Polyester and bellbottoms? A belted sweater? Probably not. <