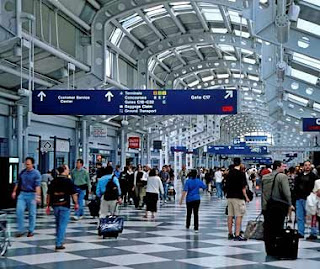 Last week a 10-word phrase that had been buried deep in my subconscious for decades unexpectedly resurfaced.

And while 82 years have elapsed since Judy Garland, as a wide-eyed Dorothy Gale getting her first look at her Munchkin County surroundings, remarked to her four-legged, pint-sized traveling companion, “Toto, I have a feeling we’re not in Kansas anymore,” there are times when that phrase (or at least an approximation of it) is still incredibly apropos."

I began last Tuesday morning as I customarily do, with a bit of stretching and a healthy breakfast. I followed that with a short bike ride, an activity I hope to make habitual for the summer vacation months.

But at that point my daily routine took an unfamiliar turn. After a quick shower, I was driven to Portland International Jetport by my 20-year-old son, who was two months old the last time I flew commercially.

Apparently there have been some changes in airport protocol since March 2001. I don’t recall going through an x-ray machine the last time I flew, let alone taking off my shoes, putting the contents of my pockets into a basket, or getting patted down by a masked stranger.

But after that, things went just the way I remembered. We got a safety briefing from two flight attendants, fastened our seat belts, taxied up the runway, took off, and 50 minutes later touched down on one of John F. Kennedy International Airport’s four runways. The flight to JFK was uneventful. Which, if you are an employee or customer of an airline, is another way of saying “perfect.”

After deplaning successfully, I proceeded to the men’s room, where a man wearing a yarmulke asked me if I was by any chance Jewish. When I replied that I wasn’t, he cheerfully told me to have a nice day, putting the lie to the awful stereotype that all New Yorkers are unfriendly.

My connecting flight wasn’t being displayed, probably because it wasn’t scheduled to leave for another nine (9!) hours. Flying on a relative’s “buddy pass” is fiscally advantageous, but it does have a couple of drawbacks, which can include a lengthy layover between flights.I occupied those 540 minutes before my connecting flight to Phoenix by people-watching, taking frequent walks, snacking on the bananas I had cleverly secreted in my backpack, trying to translate the Spanish public-address announcements, and typing out these 600 words.

I wasn’t traveling with a companion, of any size. But on more than one occasion I couldn’t help thinking to myself, “Self, I have a feeling we’re not in Maine anymore.” <