Insight: Watch out for misplaced boxes of bobbins 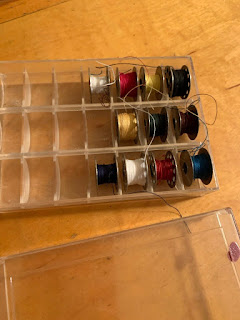 From personal experience, I can tell you that a small wooden box of bobbins can produce significant pain and suffering and leave you shaking your head in astonishment.

To set the scene, Friday, April 30 was my wife Nancy’s birthday. I had a full slate of activities planned to celebrate her special day and after she left for work, the plan was put into motion. I wrapped her gifts, then went and bought her a full bouquet of flowers and a birthday cake.

To be extra nice, I did three loads of laundry, swept all the floors and emptied all the trash cans. As the final load of laundry made its way through the dryer, I took a shower and expected to sit back and wait for her to return home to see what I had accomplished. We were planning on ordering take-out Chinese food and then enjoying the cake with her youngest son who lives nearby.

But a box of bobbins proved to be my undoing. Since it was chilly and rainy that day, I decided to wear a long-sleeve shirt, which I keep in our spare bedroom closet. To see my selection of shirts better, I stepped into the closet and turned on the light in there. I was barefoot as I was in the process of dressing. Suddenly my foot stepped on a wooden box of bobbins and sewing supplies stored on the closet floor by my wife.

Bobbins and sewing thread spools went flying everywhere much to our dog Fancy’s amusement. On the other hand, I was totally startled, slipped, lost my balance and fell backward, taking a hard fall onto the bedroom floor, landing awkwardly on the left elbow.

As I warded off the dog from snatching up the spools and bobbins, I began to feel some severe pain from the fall. But I was able to retrieve many of the small round bobbins, which are aluminum cylinders used by my wife as she operates her sewing machine.

I righted myself and slowly got up from the floor, tossing the bobbins back into the box and closing the closet door. My initial thought was why would anyone store that box on the floor where someone could step on it. However, having lived in this household for quite a few years, I’ve learned questions like that typically go unanswered or come with remarks such as “why not put it there?’

I finished dressing and thought that the pain would soon subside and would eventually go away. It was, in fact, Nancy’s birthday and nothing could spoil our plans for that monumental occasion.

With some difficulty and using strictly my right hand, I retrieved the laundry from the dryer and folded and put away the rest of the clean clothing and towels. I had lunch and then laid on the sofa waiting for her to arrive back home.

As time passed that afternoon, the ache became worse and it got to the point I could not comfortably turn my left arm or extend it without serious pain. The moment she got home, I told her what happened and sheepishly asked if we could put postpone the celebration to Saturday evening.

She agreed and drove me to the Emergency Room at the hospital to find out what was causing my pain. Five hours later, with my left arm encased in a splint and wrapped in gauze and in a sling, the doctor said that based upon my x-rays she thought I had a radial head fracture of my left elbow. She instructed me to rest the arm, told me to put lots of ice on it to reduce the swelling and prescribed morphine for the pain.

Driving home in pouring rain, I apologized to Nancy for ruining her birthday. Both of us were starving from not having eaten for more than eight hours and so we hastily gobbled down sandwiches upon getting back home and went to bed.

Days later, I’m still wearing the sling and although the acute pain has mostly disappeared, I’m still in the splint and sling and can’t get the gauze wrap wet when taking a shower. I have an appointment with an orthopedic specialist later this week and will know more then.

The moral of this story is to always be careful and watch where you step. You never know, a small wooden box of bobbins could prove to be your undoing too.