I was unaware when I married Nancy how great a Scrabble player she truly is. She mentioned her love for the game a few times when we were dating, but I had no idea what a competitive whirlwind I would spend my time engaged in a jargonistic war of wits against.

She told me that she started playing as a child and combining her extensive experience with a voracious love of reading has added significantly to her vocabulary. It leaves me constantly having to challenge unusual words that she places on the Scrabble board. Her world-class ability to make words from a tray filled with vowels amazes me and puts me at a disadvantage each time we play. 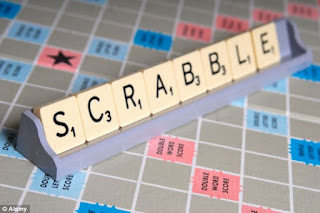 This past weekend’s game was typical of how they often go. Somehow during the game, she ended up with two B’s, an R, the letters A and I and a T which she turned into R-A-B-B-I-T which isn’t unusual, but a few hands later she added an I, and the letters N and G to it for a triple word score forming the word “Rabbiting.”

Of course, I challenged that, since I could not recall ever using that word in a sentence or an article in my 45 years as a journalist. And, as usual, the Scrabble dictionary we purchased at a yard sale a few years back included the word “rabbiting.” It is defined as “the sport of hunting rabbits.”

“Rabbiting” has now been forever enshrined in the Nancy Pierce Scrabble Hall of Fame as one of those words I will not forget from our games. It joins previous inductees such as “Jo,” “Riced” and “Id” as words that are regretfully found in the Scrabble dictionary.

She originally played “Jo” as a term that she recalled her mother used to call a cup of coffee, but the Scrabble dictionary describes “Jo” as a Scottish term of endearment.

Same thing for “Id.” When she first played that 15 years ago and said it was a term to describe self, I thought it was preposterous and she was trying to pull a fast one on me. But there in the Scrabble dictionary, I discovered that “Id” was defined as “part of a set of three concepts in psychoanalytic theory describing distinct, interacting agents in the psychic apparatus. The three agents are theoretical constructs that describe the activities and interactions of the mental life of a person.” Just so happens I was one of the few college students in the 1970s that never had to take psychology and missed hearing about the “Id.”

Another ludicrous word that arose during our Scrabble games was when she played the word “Riced.” I asked her to use it in a sentence and she said she saw it once in a cookbook. After a good laugh, I challenged that word and once again wound up on the wrong side of Scrabble history. It seems the Scrabble dictionary defines “riced” as “a cooking term meaning to pass food through a food mill or "ricer" containing many small holes, producing a smoother result than mashing, but coarser than pureeing or passing through a sieve.”

I also recall challenging her use of the word “yo” in another memorable game. I thought she was going to describe it as half of a popular children’s toy, but instead she told me it was an expression of greeting another person. Sure enough, when I looked “yo” up in the Scrabble dictionary it was there and shades of Sylvester Stallone’s Rocky Balboa, it is defined as “an informal greeting between people who know each other or as an expression of approval.”

Unfortunately for her, my challenge of her play of “Ja” as a Scandinavian expression of approval could not be found in the Scrabble dictionary and she had to take that one back on a triple-word score play using the 8-point J letter.

I also recently won a game against her by challenging one of her go-to favorites, notes from the music scale. She played “Ra” defining it as the second musical note, but it was actually spelled “Re” as in Julie Andrews’ classic “Do-Re-Mi” from “The Sound of Music.”

Despite some of these successful challenges, I’m positive that the next time we play that Nancy will dazzle me with some word, term or expression that I have never heard of before. It’s just part of her Scrabble DNA and indubitably will throw me for a loop in our never-ending mental competitive skirmish. <