Insight: A Thanksgiving not to be forgotten

It came upon me without much fanfare as a small backache over Thanksgiving weekend in 1998, but it left an indelible impression on my life and I’m thankful to still be here to relate the story.

I was covering youth football playoffs for the newspaper and standing on the sidelines taking notes when I felt a dull pain in my back that grew more pronounced as the day wore on. By that evening I felt nauseous and weak and went to the Emergency Room to see what was wrong.

That started a chain reaction of being examined, poked, prodded, and tested by four different physicians over the course of the next month as my symptoms grew worse. One of the doctors then arranged for me to have an x-ray of my chest. 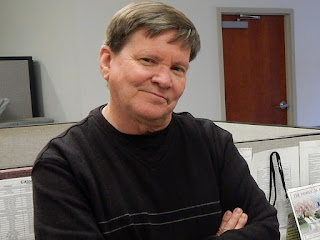 Results showed a spot on my lung and I was referred to a surgeon, who set me up with a CAT scan the next morning and made an appointment for me to review that test at 9 p.m. in his office the same day. The surgeon didn’t waste any time and in my weakened condition, I liked his aggressive approach.

In looking over the CAT scan, he told me that he couldn’t be sure without surgery, but he felt I might have lymphoma, a type of cancer, and that it could go two ways, treatable or not-treatable. He told me if it was the treatable kind, I was in good hands and he could pull me through.

It was exactly what I needed to hear at that time and was a small measure of hope. The surgeon was cocky and arrogant, but I felt if anyone could help me feel better, it was this guy. I mean what other doctors have office hours at 9 p.m., right?

I went in to the hospital on the day after Christmas and the surgeon performed exploratory surgery, took tissue samples and sent them to the lab for an exact diagnosis.

After almost a week in the hospital and my mother keeping vigil at my side, the surgeon walked into my room and told me he had good news and bad news for me. I asked for the bad news first and he said that on the first day after the exploratory surgery, he had told my mother that the type of cancer I was suffering from would take my life in less than 90 days.

Stunned at hearing that news, I meekly asked him what the good news was. He told me that just to be safe, he got a second opinion and sent my lab results and findings to the Mayo Clinic in Minnesota. They disagreed with the local findings and believed that with a regimen of six months of chemotherapy and follow-up surgery to then remove any residual vestiges of my cancer, I could expect to continue to lead a normal life.

The chemo treatments were utterly awful. I lost all my hair which fell out and within a few months had dropped from 171 pounds to 100 pounds. I couldn’t eat, couldn’t drink anything and was in bed by 5 p.m. every night. Everything tasted like ballpoint pen ink to me. I had trouble standing and walking and could barely make it from the car in the driveway into the house after numerous doctor visits and checkups.

When the chemo treatments ended it was summer and slowly my appetite returned and I was able to build up enough endurance to walk to the mailbox at the end of the driveway and then to walk on the sidewalk a couple of houses away and back again and then eventually walk around the entire block.

But another CAT scan showed a spot of residual cancer on my left adrenal gland. Within a week I was having that adrenal gland removed in the hospital before it spread to my kidney.

Two more surgeries followed that, but by the time Thanksgiving rolled around in 1999, I was back to reporting for the newspaper and much more cognizant about cancer and treatment for it. Within two years, I was told I was totally cancer-free.

I’ve gone on to become an editor and lead a number of newspapers and was married to a wonderful first-grade teacher in 2005.

But each Thanksgiving I pause, give thanks for my life, and recall how lucky I am to have lived through that. I’m proof that modern medicine truly is amazing, and that a cancer diagnosis isn’t the end of the world. <