Those who know me best are aware of my penchant for quick and expedient cooking. I’m truly a sucker for items that can be prepared and produced in under 10 minutes.

That said, through most of my adult years I have sought out products at the grocery store that meet my need for speed in the kitchen. Typically, when I become familiar and comfortable with a product, it’s either discontinued or reformulated adding some exotic spice or unusual flavor that makes me move on to something else. 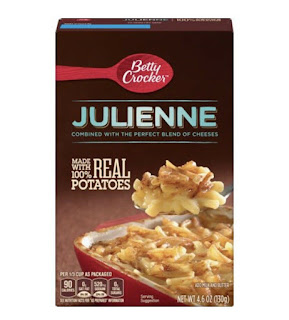 ** While frequently moving to new locations in the U.S. Air Force in the 1970s and 1980s, I couldn’t afford to dine out every night, so I started to learn to cook for myself on a budget. One rather inexpensive and simple to make meal was Hamburger Helper, and I especially liked the “Cheesy Italian” kind. It featured rotini pasta and a palatable Italian seasoning sauce mix. Week after week, I would make this for dinner and loved the taste. But eventually around 2005 as with all good things, Hamburger Helper discontinued my favorite flavor and for a while, I used my own ingredients and made my own “Cheesy Italian” hamburger casserole, but it was never really quite the same.

** Post’s Alpha Bits happened to be a staple breakfast cereal of our family when I was growing up and feeling rather nostalgic recently, I went to several local stores trying to find it, only to come up empty handed. Alpha Bits appears to have gone the way of Kellogg’s Sugar Smacks and Post’s Waffle Crisp cereals, gone too soon for those of us who crave a genuine sugar fix to start the day.

** Salads are always easy to prepare but finding a favorite salad dressing has always been a chore for me. Back in the 1970s I was introduced to Green Goddess salad dressing, a creamy concoction that stood out from the plethora of oily Italian dressings on the store shelves. Alas, at some point in the 1980s, Green Goddess vanished forever as a   viable commercial product and I had to find another favorite. I ended up choosing Ken’s Creamy Tomato Bacon salad dressing which sadly also met the same discontinued fate as Green Goddess.

** For many years I purchased an excellent Sunday meal side dish called Betty Crocker Julienne Potatoes. It was a perfect combination of cheese sauce and sliced potatoes that I fancied. When it disappeared from my regular grocery shelves, I found it available again at Walmart for several years. Now it has not been sold there either for some time depriving me of yet another of my favorites.

** Like many kids growing up in the 1960s, I tuned in at 7 p.m. every Sunday evening on CBS television to watch “Lassie” which was sponsored by the Campbell’s Soup Company. My mother would buy many different types of Campbell’s condensed soups and like her, I have always preferred Campbell’s over other brands of soups. I enjoyed the large variety of soups that Campbell’s offered and through the years , I was disappointed to find that Campbell’s no longer sells Chicken Gumbo, Green Pea, Split Pea with ham, Tomato Rice, Potato, Black Bean, Beef, Pepper Pot, Chili Beef or Turkey Noodle soups.

Pretty sure many will think me old fashioned, grumpy and rather lazy for wanting to see these products return to grocery store shelves. In fact, it’s entirely possible that I could recreate some of these long lost flavors and dishes myself if I had the time or inspiration to do so. Over the course of my life and as I’ve grown older, I’ve found that I’m a creature of comfort and set in my ways, I suppose.

In my mind, there’s certainly nothing wrong with accepting my nostalgia and longing for tastes and flavors of the past, hoping that someday some of these foods I’ve described here will possibly make their way back into my grocery cart. <