If you weren’t aware of this, I’m hooked on listening to music on my car radio. When I bought this Hyundai in 2014, it came with a free trial of Sirius XM satellite radio and I enjoyed the commercial-free radio channels so much, I subscribed and then added satellite radio for my wife’s car too.

What I like the most about the satellite radio channels is that some of them have specific formats, like all-1960s music, all-1970s music and all-1980s music. I also listen to news channels, the MLB channel and something called “The Bridge” which is a collection of mellow classic rock tunes ranging from Jackson Browne to Hall and Oates and James Taylor. 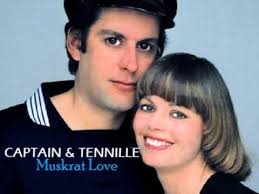 No matter if I'm driving to work or on my way to the grocery store, my car radio is on and tuned in, although sometimes I have an aversion to the current song being played. That automatically leads to a knee-jerk reaction of changing the station, which also tends to drive my wife Nancy crazy.

Should you take a ride with me in my car and one of the following songs comes on any of the aforementioned stations, please know I’ll immediately reach for the radio tuner pre-set push buttons faster than you can say “Gangham Style.” Drum roll, please:

** “Muskrat Love” by the Captain and Tennille. Although the soft rock classic from 1976 delighted their fans, I still prefer blowing up muskrats “Susie and Sam” with a stick of Bill Murray’s dynamite intended for the gopher from the film “Caddyshack.”

** “Shannon” by Henry Gross. This caterwauling about a dead Irish Setter dog makes my stomach turn just thinking about it. How it rose to eventually become Number 6 on the Billboard popular music chart in 1976 escapes me.

** “Run Joey Run” by David Geddes. When I lived in Florida, I knew a bartender who once told me playing this song at closing time made people get up and leave quicker than anything else. What were music fans thinking by making this a hit in 1975? In my opinion, it’s utter schlock and close to being the worst song ever recorded.

** “Barbie Girl” by Aqua. Despite selling more than 8 million copies since its release in 1997, this bubble-gum dance tune by a Danish band was prohibited in many Middle Eastern countries and the subject of a lawsuit by Mattel, makers of the Barbie doll. As soon as the first two notes sound when it’s played on one of my stations, I reject it with breakneck speed.

** “Bad Day” by Daniel Powter. For me, it best sums up my thoughts about this 2005 hit to know it was used as the elimination video montage song for contestants kicked off from Season Five of American Idol. I detest this tune so much that I’ll just turn the radio off completely when it airs, rather than change the station.

** “I’m Too Sexy” by Right Said Fred. Since it came out in 1991, I have thought that they’re not and will go out of my way to prevent a single note of their song to reach my brain. As far as I know, Right Said Fred is still out there taking turns on the catwalk somewhere.

** “More More More” by the Andrea True Connection. Many of you are too young to recall the days of disco in the late 1970s, but I sure do and for me, this 1976 “song” is overhyped and nonsensical. Disco fell out of favor by the early 1980s and rightfully so if you ask me. This is the epitome of disco excess and forever banished from the soundtrack of my existence.

** “Feelings” by Morris Albert. Until Justin Bieber came along, I thought Morris Albert’s overplayed 1974 hit was the worst concoction of rubbish I had ever heard. Thankfully, it isn’t played much on satellite radio if at all. And for that, I am eternally grateful.

Consider yourself forewarned if you’re ever in my car and you reach over to turn up the volume for 1970’s “Color My World” by Chicago. It is absolutely verboten and if you value me as a friend, you’ll think twice before doing that in my vehicle. <