When I was a teenager, my father invited a co-worker home for dinner one evening and I can still recall that conversation around the kitchen table to this very day. My father’s guest was British and told us of his love for “Skiffle” music and in particular, a song by Lonnie Donegan called “Does Your Chewing Gum Lose Its Flavour (On the Bedpost Overnight).”

A few years later I heard that tune on the radio and felt it was highly overrated. To me it was a case where the singer based a popular song on a ridiculous song title.

As I've gotten older, I've noticed this happens a lot in music and so here's a list I have complied of stupid song titles I have heard: 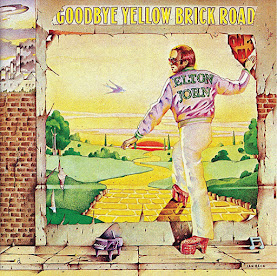 ** “You Make My Pants Want to Get Up and Dance” by Dr. Hook and the Medicine Show. I was at a dance club in Albuquerque sometime in the 1980s when I first heard this disco song. Do yourself a favor and avoid it on You Tube if at all possible. You’ll thank me, trust me.

** “She Thinks My Tractor’s Sexy” by Kenny Chesney. Country music songs have had a lot of strange titles through the years, but for me, this one always ranks right up there. The video for this is equally comical, about a beautiful woman bringing Kenny Chesney a basket of fried chicken and a jug of sweet tea as he maneuvers his tractor through a cornfield.

** “Um, Um, Um, Um, Um, Um” By Wayne Fontana and the Mindbenders. I was reminded of this song a few weeks ago when Wayne Fontana passed away. Better known for his “Game of Love” hit in 1965, Fontana recorded this harmonious song in 1964, a year before becoming famous in Great Britain.

** De Do Do Do De Da Da Da” by The Police.  I actually saw The Police perform this song in concert in the early 1980s. And as many times as I’ve listened to it on the radio and purchased The Police album “Zenyatta Mondatta” it was from, 40 years later I still have no clue what the song is about. Probably never will.

** This Song has No Title” by Elton John. Written by Bernie Taupin, this song from one of my favorite albums “Goodbye Yellow Brick Road” would have been better named “I’ve Run Out Of Song Titles While Composing A Double Album.”

** “You’re The Reason Our Kids Are Ugly” by Conway Twitty and Loretta Lynn. With numerous duets these country music legends recorded together in the 1970s, this one stands out for me for its sheer comic absurdity. If this was ever on American Bandstand’s “Rate-A-Record,” I would have given it a 40. “It hasn’t got a good beat and you can’t dance to it.”

** <TIE> “Raining Tacos” by Parry Gripp AND “Satan Gave Me A Taco” by Beck. It says truly says something when both of these songs have been played non-stop in public parks by American cities to keep homeless people from sleeping there overnight. This is akin to the U.S. Army blasting the compound of Panamanian dictator General Manuel Noriega in 1989 with non-stop heavy metal music to try to get him to surrender peacefully. He eventually could take no more of the psychological torture and gave up. And in my opinion, the 1980s singer named Taco who re-recorded “Puttin’ on the Ritz” should be on the Stupid Name List.

** “Mmm Mmm Mmm Mmm” by Crash Test Dummies. They had to have known “Weird Al” Yankovic would envision a parody version and of course, he did so masterfully. I suppose Weird Al’s version will be the only song to ever mention both Tonya Harding and John Bobbitt in its lyrics.

Honorable mentions: “The Whiffenpoof Song” by Rudy Vallee, “Drop Kick Me Jesus (Through the Goal Post of Life” by Bobby Bare, “The Mississippi Squirrel Revival” by Ray Stevens and “Dead Skunk in the Middle of the Road” by Loudon Wainwright III.  <