Insight: To Fear or Not to Phobia

When I was younger, not much scared me. I wasn’t the type to be easily frightened by what could be lurking in the shadows or under my bed at night. Yet as my life has progressed, I have developed a certain phobia which I’m cautiously about to share in an effort to better understand what makes me uncomfortable as an adult and perhaps why they do.

And contrary to what my wife will say, no it’s not an irrational phobia about home redecorating. 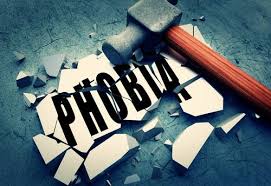 When I was about 10 years old, my mother took me to Seabreeze Amusement Park near Lake Ontario in Irondequoit, New York one summer afternoon. The main attraction there was an old wooden roller coaster called the Jack Rabbit, which is the fourth oldest in the world and the second oldest continuously operating roller coaster in the United States.

My mother told me one of her greatest fears was riding the “Jack Rabbit roller coaster” because it featured a drop of about 75 feet and she had a fear of heights. I watched as visitors to the amusement park climbed aboard the roller coaster and they screamed out as it suddenly dipped and twisted on its wooden tracks. There and then I developed a phobia about roller coasters that lasted nearly 38 years.

On a trip home to attend my high school reunion in 2001, a group of my friends and I decided to visit Seabreeze Amusement Park to see if it remained as we had known it growing up there. Smack dab in the middle of the park, I stood at the entrance to ride the Jack Rabbit and decided it was finally time to conquer one of my longstanding phobias.

Turns out, riding the Jack Rabbit wasn’t all that bad. Yes, it was a steep drop, but I had fun and didn’t lose my lunch overboard when it made its climatic run down the tracks.

Even though I was able to overcome my phobia about roller coasters that day, I still am not crazy about heights. Recently my wife and I were watching an episode of the “ER” television series and it included a scene where a distraught patient had climbed out onto a ledge on the hospital roof and a doctor also ventured out on the ledge to prevent the patient from jumping.

Just watching that scene made my stomach churn and I closed my eyes as the television camera looked out beyond the ledge to the ground 12 stories below. I’m also creeped out by old photos of workers sitting on a girder eating lunch when the Empire State Building was under construction in New York City or another famous photo from the 1930s of a woman standing on the eagle at the top of the Chrysler Building.

I suppose helicopters should go on my phobia list too, but for me that’s an offshoot of my apprehension about heights. In 1981, while serving in the U.S. Air Force in Arizona, I was asked by my commanding officer to survey a crash scene of an F-15 Eagle aircraft that had gone down in the desert south of Phoenix.

As a member of the emergency response team, I had to get on a helicopter that was headed to the crash site. This particular helicopter had its doors removed and the only place for us to sit were on metal benches in the back. It also didn’t have seat belts, instead, you had to tied yourself in with ropes attached to the frame.

As the helicopter banked both right and left over the crash site, I clutched tightly at my ropes, fearing that if it loosened, I would tumble out the open door to certain death waiting several hundred feet below. Only when the helicopter landed back at the Air Force base did I feel safe again and tossed away the barf bag I was issued prior to takeoff.

On several occasions over the next few years, as a military journalist I had the opportunity to cover “incentive rides,” or F-15 flights given to outstanding enlisted aircraft mechanics or other military members recognized for top achievements. The person being awarded the “incentive ride” would climb into the back seat of an F-15 and the pilot would take them for a thrilling flight across the Arizona skies.

The first time I covered one of those events for the base newspaper, I noticed a large plastic bucket filled with water waiting on the flight line near where they aircraft was supposed to land. I asked what it was for and was told it was a surprise and to wait and see.

When the flight landed and the person receiving the “incentive ride” was back on the ground, he bucked over and threw up all over himself from having pulled 2 or 3 Gs (or Gravitational Force Equivalent) as the airplane accelerated to Mach 1 during his time in the air. The bucket of water was thrown over him to wash away his vomit and I was informed that it was an Air Force custom to have it handy for those not very experienced at pulling Gs on a regular basis like F-15 pilots were.

In 1983, having been awarded the Tactical Air Command “Journalist of the Year” award, my commander let me know that if I wanted, he could arrange an “incentive ride” in an F-15 for me. Having witnessed and reported on a number of those, I was well aware of how they turned out for the recipient and I politely declined his offer.

So at this stage in my life, it’s safe to say that you won’t find me rock climbing, bungee jumping off a bridge, hanging out on a sky deck hovering over the Grand Canyon, or laughing it up while free-falling 130 feet to the ground aboard Universal’s “Tower of Terror” in Orlando, Florida.

In my opinion, some phobias are best tackled from the all-to-familiar living room sofa. <