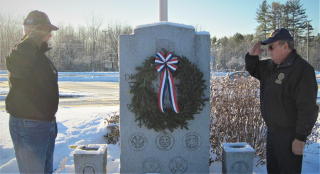 Since the Town of Windham’s relocation of their Veterans Memorial in 2005, now located in front of Windham High School, the American Legion Field-Allen Post has been placing a Memorial Wreath on the stone in remembrance of the attack on Pearl Harbor and the beginning of WWII for America.  On the 78th Anniversary of the attack, Post Honor Guard members, David Rendall, Craig Pride and Larry DeHof continued the tradition with the placement of the memorial wreath on a very, very cold Dec 7th, 2019.  Photo by Larry DeHof