Insight: She who works with her hands

I remember being asked that same question when I was in the second grade. Mrs. Dooley asked all 15 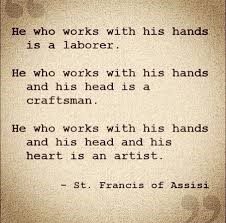 Billy said, “I’m going to be a professional football player.” Vickie was next to answer and then it was my turn. “I want to be a ballerina,” she said. The pressure was on and I still hadn’t come up with anything unique. I wish I would have simply told the truth and said I didn’t know, because after, all I was only eight years old. But instead, I blurted out, “I want to be a cashier when I grow up.”

Silence. Complete silence from not only Mrs. Dooley but my classmates as well. I was embarrassed. I had no clue why I even said that. It must have been on the previous week’s spelling test.

The lesson from this story comes in the form of two questions: Why the silence? Why my shame?

What I didn’t know then is that I would go on to do something, by society’s standards, that might be considered a rung below a cashier. The perception was confirmed about six months after I started my own cleaning business – cleaning residential and commercial properties. While I was proud of being a sole proprietor, I was soon reminded of the seemingly unimportant career path when I arrived home one day shortly after starting my entrepreneurial endeavor to a message left on the answering machine (this was before the popular use of cellphones). The message went something like this:

“Hello Rainy!”, my Ivy League educated friend began. “I do realize that cleaning is quite the lucrative business, but – oh Rainy – cleaning for others is so beneath you.” I knew she saw within me a different potential, but she did not see the value in the service to others – but perhaps more importantly – the service to myself. I was preparing to become a writer.

If you ask anyone who works with their hands, they will tell you that some of their most creative thoughts occur during routine and mundane activities. In fact, according to an online magazine article from “Psychology Today” written by Carrie Barron, MD states:  “Research has shown that hand activity from knitting to woodworking to growing vegetables or chopping them are useful for decreasing stress, relieving anxiety, and modifying depression. There is value in the routine action…. foster[ing] a flow in the mind that leads to spontaneous joyful, creative thought.”

In another article, “Lessons I Learned Cleaning Other People’s Homes”, written by Inka Linda Sarvi, captured what I learned myself in the cleaning business. Sarvi was hired by Zenith Cleaning as a communications and marketing professional – who was also required to clean homes and offices.
She said that every time she finished cleaning a space, she couldn’t deny how peaceful she felt. “I now look forward to how good it feels to get lost in the relaxing rhythm of wiping surfaces and the meditative concentration of focusing fully on one task at a time. The strangest and most fascinating part is how when I clean, I’m constantly struck with new ideas for short stories, poems, songs and paintings, as if my creativity is no longer gated by the constraints of time or assignments.”

She continued by saying that it didn’t make sense to her how cleaning something that inherently makes a space better and helps others is so looked down upon. “It illuminates the truth that the stigma around it is no more than a collective illusion, just one of many other falsehoods that make up the fabric of our society.”

I will admit, I’m glad that my career in cleaning is now behind me as it is hard physical labor. However, what I have learned is there is no shame in working with one’s hands. If I ever had an opportunity to go back to my eight-year old self in Mrs. Dooley’s class, I would proudly announce that I would grow up to be a sole proprietor of a cleaning business…and then I would add, “I’m going to be an author too. I promise to give you all a signed copy of my bestselling novel. Thank you.” And then I would take a bow.