The lost art of brainstorming by Jeff “Chief” Urbaniak

Almost all of us have been told at one time or another to brainstorm for some ideas. Upon that command we go back to our workstation and sit and think for a few minutes and BOOM, we have an idea. Brainstorming has become the simple process of “coming up with something.” That is not really what brainstorming was initially intended to be though. About 50 years ago, it was devised to be a process (involving a group of people) used for the purpose of igniting creativity for finding ideas. 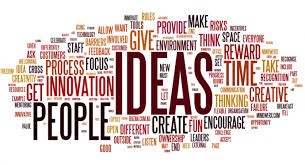 The true essence of brainstorming as a method is well described in Alex F. Osborn’s book, “Applied Imagination”. The core message is simple:

You have three things:  facts, ideas, and solutions.

You need to spend quality time with all of them. The great mistake is leaping from facts to solutions, skipping over the play and exploration at the heart of finding new ideas. Most of us are familiar with facts - we were inundated with them in school. We’re also familiar with solutions, which are the end results that accomplish something or solve a problem.

But idea finding? What’s that?  It’s what few people are patient enough to do, yet it’s at the heart of creativity and brainstorming.

1.Produce as many ideas as possible.

Set the goal on volume instead of quality. According to Osborn, a group of four or five properly led people can continually find new ideas for anything for a half-hour to an hour, producing 50 to 100 ideas before running out of steam.

2.  Produce ideas as wild as possible.

Allow brainstorming participants to cross boundaries and say illogical, unexpected, and unpredictable things. People naturally inhibit what they say for fear of embarrassment. If you set outrageousness as a goal and reward it, you help turn that filter off.

3.  Build upon each other’s ideas.

No ideas are 100 percent new - they’re all combinations of something and something and maybe even something else. Making this explicit, prevents people form suppressing ideas for the fear of stepping on (or changing) an idea mentioned by someone else.

If you don’t know enough about the possibilities, why would you reject or accept any idea?  When finding ideas, all brainstorming participants need to know their ideas won’t be judged until later. And when seeking volume in ideas, there’s no need to evaluate every initial thought - only write them down so they can further be explored.

There are limitations, though, when conducting a brainstorming session. When done as groups, the human dynamics of social situations come into play. Are people trying to kiss up to the boss?  Does one person always hog the floor? Is another afraid to say anything?  Designating a skilled facilitator keeps things flowing and fair and ensures that the rules are followed and that the meeting runs only as long as necessary.

So, reacquaint yourself and your team with the lost art of brainstorming. When done properly, it could very well lead to great, new ideas, which in turn can lead to great success.

Posted by The Windham Eagle at 5:51 AM