When people find their tribe - By Michelle Libby


A tribe is like-minded people who think alike, act alike and aren’t afraid to be who they truly are. They aren’t worried that someone might think they’re a geek or weird. It doesn’t matter when you’re in a tribe…you’re accepted for who you are. 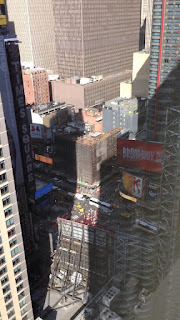 This week, I will go visit with my tribe of at least 1,500 people in New York City. My people think alike, we spend a lot of time alone in front of a computer writing down the stories in our head. We’re a creative bunch that doesn’t socialize all that often, but when we do…watch out!

The Romance Writers of America is hosting their annual national conference for four days. I hear it’s a blast and people leave the conference motivated, exhausted and ready to conquer the writing world.
This week I’ve been trying to plan for what I’m going to do down there and my roommates have been super helpful in sending me dinner invitations with famous romance authors, lunch plans at exotic restaurants and after parties that will keep us out dancing until dawn in the city that never sleeps.
To say I’m nervous is an understatement. The elevators alone are a marvel…did you know that the tallest building in Maine is only 14 stories? In NYC, I could be on the 43 floor and can access the bottom nine floors by escalators.

I love to travel and meet new people. There will be many friends from other conferences and chapters that I can meet up with, but I’m excited to gawk at some of the authors I have only read and have never met like Nora Roberts, Debbie Macomber and Sabrina Jefferies.

My plan is to do some blogging about my adventures in NYC at the RWA conference once I get there. We shall see how that works out. I’m looking forward to sharing my adventures with anyone who will listen. Have a great week.

Michelle
Posted by Michelle Libby at 11:27 AM