My wife recently brought home a copy of the 2023 Farmers’ Almanac from the store and in looking it over, I noticed a section called “Will it Snow,” a collection of old sayings, adages, and folklore suggesting how wintery it might be this year based upon suppositions. 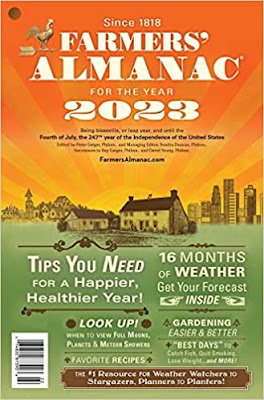 With items such as “A green Christmas means a white Easter” and “As high as the weeds grow, so will the bank of snow,” it makes me wonder if I’ve been approaching life wrong. If all it takes to make bold weather predictions are old wives’ tales and superstition, I should be farther along in my quest to become the go-to source for correct weather prognostication.

Growing up, my mother would occasionally sprinkle in a few old wives’ tales sayings into her conversations with her children and some involved the weather.
Once she told me “Woolly Bears Change Their Stripes.” When I asked her what that meant, she told me that was an expression her Aunt Martha had picked up when she was living in Canada.
It seems that the pattern of stripes on a woolly bear caterpillar was rumored to predict the severity of the oncoming winter. According to my mother, if the caterpillar’s black stripes are wide, that indicates that this year’s winter will be long and tough. If the middle brown stripe caterpillar segments appear to be broad, we can come to look for a much milder winter than normal.
She also told me that “If you hear thunder in winter, we’ll have heavy snow in 10 days.” Where that one comes from, I have no idea, but years ago I had to report on a winter blizzard in New Mexico where residents could hear thunder and see lightning as the snow fell.
Once on a visit to a relative’s farm in Perinton, New York in the 1960s, my mother took me aside and told me that she always believed that how thick a corn husk appears is directly related to how cold the coming winter months will be. As an adult, I find that one to be rather far-fetched. In school, I learned that corn grows based upon how much it rains or doesn’t rain during the summer, and I don’t place much stock in that one at all.
For some reason, my mother also would mention that “Every foggy day during August amounts to a day of snowfall this coming winter.” Again, I find this old wives’ tale to be unbelievable. Fog is a low-lying cloud that is influenced by nearby water, wind conditions and the topography of the land. What fog in August has to do with weather patterns in February simply escapes me and although some superstitions have some grain of truth in them, I’m hard-pressed to find anything credible with this one.

Several of my mother’s old expressions also involved the moon and winter. She once said, “Clear moon, frost soon” and “Ring around the moon means snow soon.”
Those sayings do indeed have some basis in fact, as frost typically occurs when the temperature of the air contacts solid ground that is below the freezing point. When the skies are clear and without cloud cover overhead, the ground cools faster than normal because there are no clouds to retain surface heat resulting in frost. Therefore, without cloud cover, the moon would appear to be clear, and it could mean a frost is near.
The same principle applies to seeing rings around the moon. A ring, or lunar halo, are cirrus clouds so high in the atmosphere that they obstruct our vision of the moon appearing to be a ring around that celestial object. Cirrus clouds​ are the first sign of an approaching storm front and these clouds usually thicken to form ​cirrostratus clouds and then nimbostratus clouds, commonly called snow clouds. Again, there’s some fact to this old wives’ tale.
I used to love snow days when we were off from school, and I can remember a conversation when I was in third or fourth grade with my mother after dinner when I was wondering if it was going to snow that night. She told me “If snow stays on the ground for three days, it’s waiting on another one.”
When I asked what that meant, she said the snow from a storm we had on a Friday morning in early December was still on the ground the following Monday evening, so yes, she expected another storm that night. Whether it arrived or not, I don’t recall, or if it did, whether it was enough to force school to be canceled. I do have my doubts about this one too, but if it’s cold enough to keep snow on the ground, it’s probably cold enough to snow again too.
Not sure where my mother acquired many of these old wives’ tales and superstitions, but it was interesting to sometimes hear them in her conversations. Relating them years later must mean that in some way, I’m now the keeper of such odd weather prognosticating expressions.
Here’s one of my own that I hope catches on: “Ice cream tastes great no matter the season.” <
Posted by Ed Pierce at 2:10 AM