Insight: The good, the bad and the totally obscure 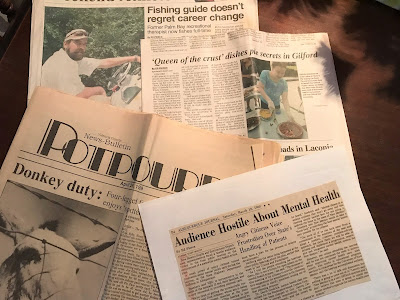 Back in May, I passed the 46-year threshold in the profession of journalism, and it’s been a roller coaster ride filled with some great articles, memorable individuals and wonderful stories to tell. Along with the late hours, sometimes intense supervisors, meals on the run and playing countless hours of phone tag, I’ve been lucky to survive to this point and am still working in a profession driven by relentless deadlines and rigorous accuracy.

Packed away in my basement are about a dozen moving boxes filled with old copies of newspapers I’ve worked for and articles and clippings of stories I’ve written going back to 1975. Some of my co-workers through the years have told me I could save a good deal of space by digitizing the old articles and storing them electronically, yet for sentimental reasons, I simply cannot bring myself to do that.

Careful examination of what’s stored inside these boxes of old and yellowing newsprint will reveal unusual tales of athletic glory; love undiminished by time or death; champion animals; physicians who delivered hundreds of babies; the end for old buildings and the dedication of new bridges, and new schools.

In the Saturday, April 26, 1989 edition of the Valencia County News-Bulletin in New Mexico, I wrote a feature story about five spotted donkeys living on a farm behind the A&W Drive-In in Belen. The brown and white donkeys were retired after a career making television commercials and ranged in age from 7 to 17. The Allen Family had purchased four of the donkeys from a veterinarian near Santa Fe and one was born into the group a few years later. The donkeys were nearly celebrities in Belen and frequently subjects for local artists.

In the Monday, Aug. 25, 2014 edition of the Laconia Citizen in New Hampshire, I wrote an article about Betty Tidd of Gilford, whose pies sold out each time the Gilford Public Library hosted their annual fundraising “Book, Pie and Ice Cream Sale” in conjunction with the town’s Old Home Days celebration every summer. Her unique “Betty Pie” featured four different types of huge fruit slices, including strawberries, blackberries, blueberries and raspberries, all held together by a sugary glaze and a heavenly golden baked crust. Tidd said that the secret to making a great pie is simple – you have to start with good fruit and go from there. Each year Tidd would be one of 30 or so residents who would contribute pies for the fundraiser, but she remained its most popular and endearing baker, with her pies sometimes being auctioned off for $50 or $60 to benefit library programs throughout the year.

In the Wednesday, July 17, 2002 edition of the Merritt Island Press-Tribune in Florida, I wrote an article about hospital recreational therapist Ricky Campbell, who loved fishing so much that he left his former career behind to become a fulltime fishing guide at the age of 42. Campbell said he didn’t regret changing his career one bit and loved being outdoors and being his own boss. He said his most challenging times as a fishing guide came in the summer months because of the threat of sudden storms out on the water on his boat or having to endure the significant heat, humidity and insects while working outside in Florida.

In the Saturday, March 19, 1988 edition of the Albuquerque Journal in New Mexico, I wrote an article about a crowd of angry citizens who gathered and voiced their concern about a lack of funding for mental health and the handling of patients during a public hearing in Albuquerque regarding the development of a statewide mental health action plan. Speakers said the New Mexico Health and Environment Department was unresponsive to the needs of the mentally ill and was only interested in providing minimal care for those suffering from mental illness.

In the Oct. 2, 1985 edition of the Clovis News-Journal in New Mexico, I wrote an article about Kay Jemison, an 8-year-old second-grade student who found an injured baby squirrel at the end of her driveway and with the help of her family had slowly nursed it back to health. She had named the squirrel “Monty,” short for quarterback Joe Montana of the San Francisco 49ers. The squirrel lived in a small cage in their family room and liked it when members of the girl’s family would give it shelled peanuts.

In the Dec. 24, 2003 edition of The Melbourne Times in Florida, I wrote an article about the upcoming boys’ prep basketball season. It included capsules of last year’s record, returning lettermen and promising newcomers, the coach’s overall record and how the team fared in the 2002 state playoffs. Of the 12 schools I previewed, I predicted the Class 1A Brevard Christian School War Eagles would make the state Final Four tournament, and they did, finishing as state runner-up. <
Posted by Ed Pierce at 2:08 AM