A few weeks ago, I was reading a magazine article while waiting in a doctor’s office and an author wrote that “when priorities are in place, one can patiently tolerate unfinished business.” That got me to thinking about my own unfinished business and why some items on my list may never have resolution and rightfully so.

Here’s a partial list of my unfinished business accumulated over my lifetime:

** Back when I was about 10, my parents were visiting their friends Melvin and Olga Mullins on  Saturday evening. My brother and I liked going over there because it meant we could spend time with Wayne Mullins, who was close to our age. In his basement Wayne had a fantastic electric train set and a cooler filled with 10-ounce bottles of Coca Cola. But this particular night, we watched an old black and white movie called "Red Skies of Montana" from the 1950s about smoke jumpers, an elite unit of the U.S. Forestry Service that would parachute behind forest fires to help put them out. With about a half-hour remaining in the movie, my parents wanted to leave and go home. To this very day I have no idea how the movie ended or if either of the characters portrayed by Richard Widmark or Jeffrey Hunter lived or died fighting the fire. 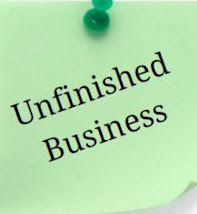 ** A more recent movie I never finished was 1996’s Broken Arrow starring Christian Slater and John Travolta. I had gone to the theater in Titusville, Florida to watch that movie on a Friday evening.  As the action in the film was nearing a critical point and the detonation of a nuclear bomb, the lights in the theater came on and the movie was stopped. The theater manager told everyone they had to leave their seats immediately and proceed to the exits because the theater had received a bomb threat. After standing outside the theater for more than a half-hour waiting for the movie to resume, the manager came around and handed everyone free tickets to another show and said the theater’s projector had broken and the movie could not be shown that night. Just like “Red Skies of Montana,” years have passed, and I still do not know if Christian Slater’s good-guy character was able to stop the villainous character of John Travolta from exploding the nuclear bomb in that movie. Not sure if I actually want to know the ending of that movie with 24 years of hindsight.

** My knowledge and grasp of world economic systems also makes this dubious list. One-third of the way through Economics 101 in college, I was sitting there with an “A” grade on my tests to that point, and my confidence was soaring. I recall thinking that this was one college course that wasn’t as difficult as I was told it was going to be. Then the Economics professor handed out the next batch of reading assignments on a Friday afternoon and started talking about what we were expected to know to pass the mid-term examination and I suddenly panicked. I lost all of that confidence and first thing Monday morning I walked to the college’s administration building and dropped the class while there was still time to do that. My college advisor said it was the first time he had ever heard of someone carrying an “A” grade in a class wanting to drop the class because “it sounded like it was getting more difficult.” I’ll never know and to this day, I’m thankful I bailed on that one.

** Another item on my list was an interview I had in the late 1970s with Eric Burdon, the lead singer of the 1960s band “The Animals.” About midway through the interview, Burdon said he wanted to tell me something he wanted the world to know about him and I was the right journalist he felt comfortable sharing it with. Then the telephone rang and interrupted the interview. When Burdon returned from the phone call, he could not remember what it was that he wanted to share with me and the world appears to be still waiting for that major revelation. That experience, however, did compel me to ask future interview subjects to have someone else answer their phone during interview sessions.